I never know for sure what Ben will eat.  Oh sure, I have some ideas as to what he likes.  But he’s a toddler.  Just because he has liked something every day for the past year doesn’t mean he will like it tomorrow.  Despite this, we try not to stress out about what Ben is eating too much.  Overall he has a pretty healthy diet.  We want him to like lots of foods, so we usually give Ben small amounts of whatever Pat and I are eating along with foods we know he will eat.  I can honestly say most of the time I am right about assuming Ben won’t like stuff.  This is one time I was so wrong.
Sunday after Ben woke up from nap he was pestering me in the kitchen.  I was making some corn chowder to go with dinner, and I finally gave him a taste.  I really thought he would hate it and that would be the end.  He’d get bored, go play, and I would get to finish making dinner.  No, that is not what happened.  Ben asked for a second taste.  Then a third.  It was only about 45 minutes until dinner time, so I told him no more til dinner. The poor boy burst into tears at this.  Well, who am I to say no to that?  I mean, it was reasonably healthy.  I told him if he wanted more, he would have to sit in his high chair.  This often causes him to decide he isn’t that hungry after all.  Nope.  He ran right over and waited to be put into his chair.  He sat and ate two and a half bowls of chowder.  Then he took a break.  Later, when Pat and I finally sat down to dinner, he ate almost two more bowls of this chowder.  Now, they were his toddler bowls.  They aren’t super big.  But still. That is a lot of chowder for a little dude!
Overall I can only conclude that I really have no clue what my toddler will eat at any point in time. Either that or I make some killer corn chowder.  🙂 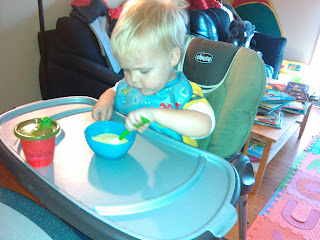 Of course the real test will be if he eats it again.  That is a mystery to be solved later…

Update:  Ben refused to eat the chowder when offered on another night.  Phew, all is right with toddler logic. 🙂