Lately Ben has been all about helping me in the kitchen.  Sometimes, yes, this is hard because I just want to get things done.  But mainly it is awesome!  I love cooking and baking and I am so happy he has started to take an interest in it too!

Ben is already a master at stirring.  For a little boy who usually is rough and tumble, he is actually pretty gentle at cooking!  He stirs nicely.  He listens when I tell him to keep the spoon in the bowl.  By far his favorite thing is to crack eggs.  Seriously, he is so gentle with them it is funny.  He barely taps them on the edge of the bowl.  Of course to compensate for that he occasionally crushes the egg with his fist when we tries to open them.  He’ll get the hang of it though.  I have gotten pretty good at getting egg shells out of things, but if you get something made with eggs and Ben’s help, well, you’ve been warned. 😉

I think cooking and baking are great ways to fit in little lessons about comparative size, counting, measurements, and a little basic math.  I try to get Ben to count out everything we use.  I know it’s a bit early for him, but we talk about fractions.  Baking in itself is a chemistry lesson, learning how ingredients mix and change.  That will come later though.  Right now we are working on opposites like wet and dry, hot and cold.  And the best part is that we have fun while we do it!

This past week Ben came running up to me asking to bake a cake.  Fortunately I try to keep baking mixes in the pantry at all times.  (Yes, we could do it from scratch.  But a mix fits in with a two year old’s attention span.)  After studying the back of the box Ben decided he wanted to make cupcakes.  So we did!  Ben helped every step of the way.  He was even good about backing away while I put them in the oven.  That evening we went to the grocery store and he got to pick out some frosting to put on them.  He picked out bright red, so he kind of looks scary when he eats the cupcakes, what with the blood red frosting smeared around his mouth.  But he was so happy and proud of himself for baking the cupcakes.

I hope this interest continues.  Not only is preparing food a practical life skill, it has so many lessons as I mentioned above.  And what parent doesn’t love when their child shares their interest?  Time to start looking for more toddler friendly recipes to make!

The girls got in on the fun, watching us an enjoying some ‘hats’ courtesy of big brother. 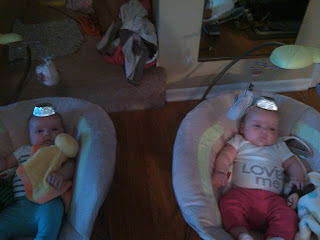 Ben was so proud of himself! 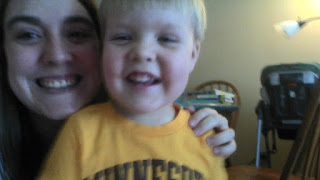 After dinner Ben finally got to eat one! Yummy! 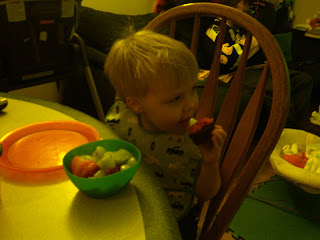 And yes, you can see in the picture the big bowl of fruit he is ignoring.  I was as excited as he was to let him eat a cupcake, and I didn’t notice he hadn’t eaten his fruit yet.  Oops, parenting fail.  Oh well.  I’ll try to remember next time. 😉