At the end of every school year, Pat’s school does a big field trip to a nearby park district attraction.  This year it was brought to our attention that while the school would be taking up most of the park, it was still technically open to the public.  You know what that means- we crashed Daddy’s field trip!

It was actually really awesome that we decided to go, as Pat forgot his phone that day.  We pulled into the park just as the buses were getting in, perfect timing.  We got to meet up with Pat and head into the park!  It was so fun to see Pat’s teacher friends and show off the girls.  Plus it was funny to see the look of confusion that crosses some kids’ faces when they realize their teachers have lives and families outside of school.  I was happy to see Pat interacting with his students too, it’s always fun to see Mr. Cartwright in action!

The park itself was awesome.  They have all sorts of fun things for the kids to do.  There was a carousel, pony rides, a train, a giant playground, a toddler zone, animals, and educational areas.  I would like to say we saw more of the educational areas (which included a blacksmith and one room school house), but Ben was not into that.  I think when he gets older we will force him to look at them a bit more.

We had a lot of fun checking out most of the attractions.  Everything was perfect for the elementary kids, but some things were a bit too big for a two year old.  Fortunately for me Ben had no interest in the pony rides.  He wanted to ride the carousel, and we were able to get him on that with Pat.  It scared Ben a bit, but he liked when I cheered for him from the side.  We avoided the train.  I was a little bummed to have to do that, but strollers were not allowed on it.  There was no way I could get both girls and Ben on the train to enjoy it.  Ben wanted to go into the playground, but it was huge and had lots of places where I couldn’t see him.  Again, with just me that didn’t work.  I felt so bad he couldn’t play in it, but I couldn’t leave the girls of course, and I was not comfortable not able to see Ben.  All this means that we will have to go back more this summer with an additional adult or two! (I’m talking to you, Meo and Omi!)

Despite not doing several things, we did still have a blast!  There was a toddler zone with cozy coupe cars to drive around.  This was the first time Ben could actually get in one and drive around.  His cousins have them, but he was too little to really enjoy them last time we visited.  We spent a good chunk of time playing in that area.  We looked at farm animals, and we had a picnic lunch.  We really just had fun walking around, as it was a perfect day out.  Sunny and in the low 70s.  Being the cool mom that I am, I splurged and got us a blue slushie to share as well.  Ben got a big kick out of our blue tongues after that.

Overall we had a great time, and for sure will be going back.  I think this is a place we will enjoy often as the kids grow!

These girls were awesome the whole trip.  Dozed off and on and enjoyed watching everything.  Three months old and already crashing field trips, we’ll have to watch out as they get older! 😉

Ben was so excited to see Pat.  He chanted, “Daddy’s field trip” the whole drive there. 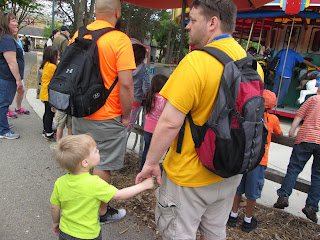 He might be a car guy, he loved this green coupe!  He’ll have to talk cars with Uncle Jared. 🙂 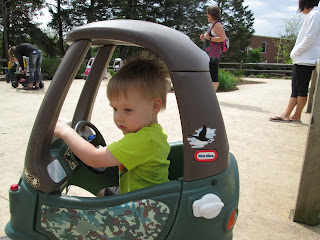 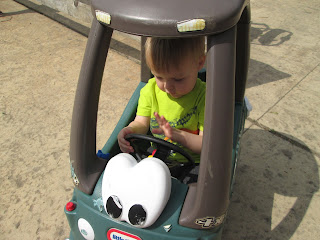 Of course we got our tasty treat.  Yummo and perfectly contained in a cup- no mess!

Ben adored crossing this bridge.  We must have done it a dozen times.  Whatever makes my boy happy.  The girls liked it too! 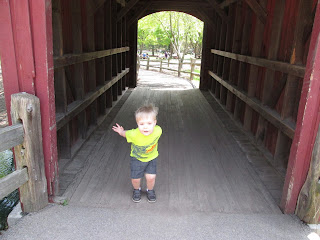 We had to head home before the field trip ended, but we had a blast.  I am so excited to go back and actually do everything with Pat, instead of just seeing him now and then.  All three kids passed out in the car on the way home, so you know it was fun.  What a perfect outing!