We are officially one month into Ben’s experience with solids.  It is going really well!  Ben caught on to the whole eating thing very quickly.  True, the first couple attempts didn’t end with him eating much.  But he was very open to this new way of getting food.

We didn’t rush this transition.  We started off just doing dinner and lunch.  We did slow up a little bit after the first few days.  It felt like we were giving him too much too quickly.   Then Meo and Omi weren’t super comfortable with giving him such large pieces of food, so he stuck to milk on his stay there.  Then he started teething hard again.  And then he had a cold.  So overall we had a few times to slow things down and stick to just milk feedings.  Every time he had solids he seemed to enjoy them though!  (Except green beans.  Silly boy just doesn’t seem to want to eat them.)  I felt like he was getting hungrier and needed more food though.  And I don’t know about everyone else, but I eat solids all the time and have for a long time now, so it wasn’t like I was starting him on something that would later change.  He is set to eat solid food for the rest of his life.  So we jumped right in full force!  We even started breakfast.  I had been  holding off doing solids at breakfast because it meant reworking our morning routine.  Well, it had to change at some point, right?  So this past weekend we dove right into that as well.  Solids all the time!  Oh, he still gets all his milk feedings.  Those aren’t stopping any time soon as they are the main source of his nutrition.  Now instead of just those though, he gets solids at breakfast, lunch, snack time, and dinner.  I know, all we do is eat all day! 😉

Oh my, is he a happy boy!!  He loves to eat!  We have also jumped into additional foods.  The plan was to stick to the traditional time line for introducing foods.  This meant we would start with fruit and vegetables, and slowly add meat as he got older.  Then one day he lunged for my turkey sandwich.  I have him a little bite, and he loved it!  I don’t want to give him a lot of lunch meat, it has a lot of salt and nitrates in it.  But he has now had chicken and pork.  He really likes it!  Since he liked that we have given him eggs too!  Just the yolks for now, as I read the allergen part is in the albumin in the whites.  He has had oatmeal and rice. We have given him a couple of tastes of white potato made in the slow cooker, but otherwise he has just had sweet potatoes.  We are going to hold off on all the big allergen foods for right now, and the foods that have known reasons to withhold.  So no peanut butter, honey, citrus, shellfish, or milk just to drink right now.  We are holding off on dairy a little longer as well, but he has things cooked with milk.

It is so much fun!  He is so happy and sleeping so much better with a fuller tummy.  I love that I can give him mainly what we are having.  He is making Pat and I healthier too.  We have so much fruit in the house!  Wow though, can the kid eat.  He took down an entire banana himself at snack time yesterday!   I knew having a boy would mean a jump in grocery bills.  I just assumed that would be when he was a teenager or something!  It is really great to see him enjoying food and eating healthy things.  It is also a great activity for his motor skills.  Am I too old to use that excuse? 😉

As always, here are some photos of the eating machine.  It does get a bit messy, but that is part of the fun! 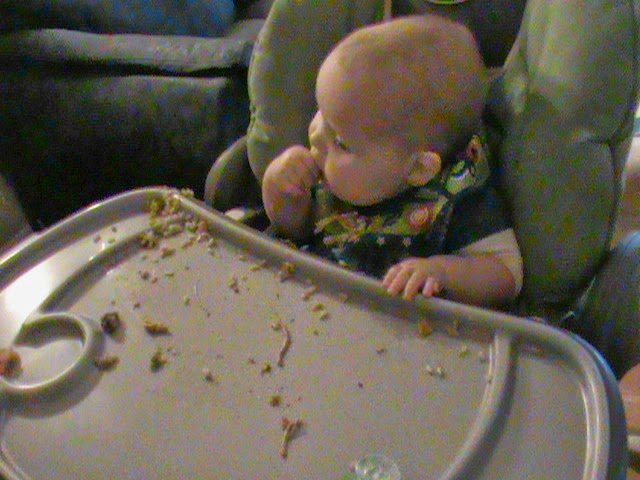 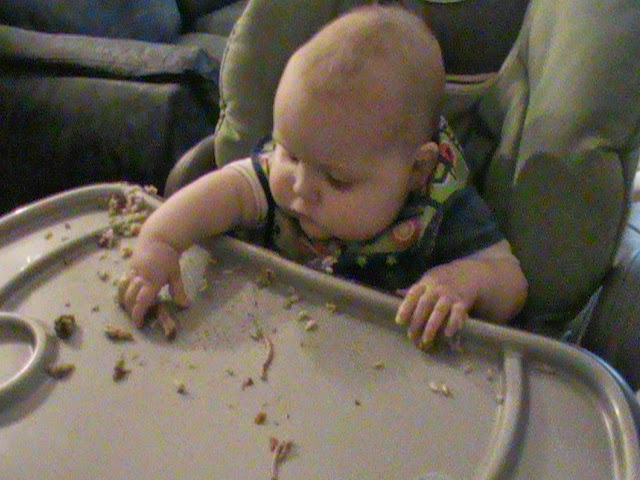 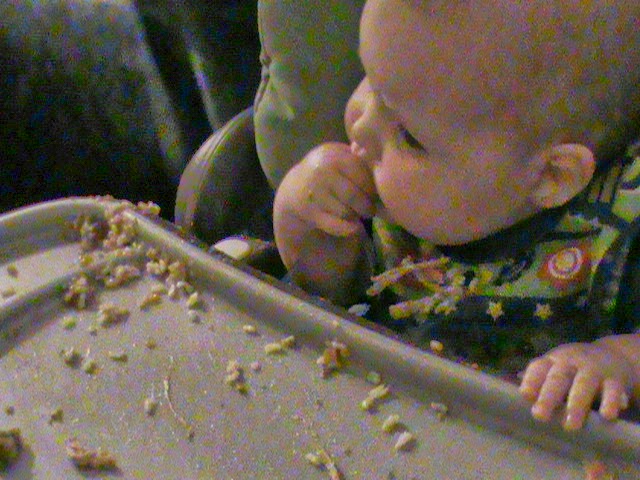 I’m so happy it is going so well for us.  We are so lucky to have a good eater on our hands!
–Kim