Ben, like all toddlers, seems to be growing by leaps and bounds. Every day he has new words and new skills.  I swear pants that fit him last week don’t fit anymore.  He is definitely growing up fast.  A few recent developments have led me to think Pat and I are almost done parenting this kid though.  Which is good, we have two more on the way.  Here is why I think that.

One:  A couple of weeks ago we were hanging out in the playroom at church.  Ben took a piece of pizza, put it on a plate, and popped it in the microwave.  True, it was plastic pizza and not a real microwave.  But still, he has the basic idea of how to make food for himself.

Two:  He knows how to go up to Omi and ask for quarters.  Surprisingly I did not teach Ben this skill.  It appears to be some sort of instinct.  Yes he is only asking for quarters now, but that can segue into larger amounts with no problem.

So overall, Ben has the main idea of how to feed himself, and can ask his grandfather for money.  Yep, our job is almost done. 🙂 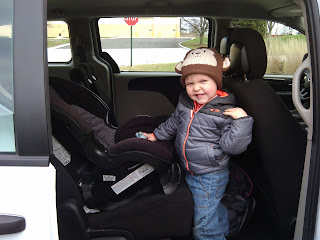 I suppose he still needs me to drive him around though.  Eh, we’ll keep him around a little longer.  Hopefully he can teach his sisters his awesome life skills.
–Kim