We had an amazing time at Prairie Fest again this year!  It is so fun to see Ben enjoy more and more activities as he gets bigger.  Plus, this year was Ali and Sammy’s first time!  Okay, they didn’t get to really participate per se, but they were there and seemed to have a good time.

The kids and I headed over to the fest on Friday.  Meo and Omi came along with us, which was awesome.  I know I can and I actually do a lot with the kids by myself.  It is just so nice to have extra adults along to help out.  Someone can stay with the girls while someone goes with Ben to do the fun stuff.  Ben really liked this too.  As soon as we got to the fest he grabbed Omi’s hands and led him off.  He left us girls to get our stuff together and meet up with them.  🙂

The first thing we did was the Touch a Truck!  They only have that on Friday morning, which is why we went without Pat.  (He was at work.)  Last year Ben looked at the trucks, but didn’t want to really touch any of them.  This year he liked getting on a couple!  The first ones we saw were the tow trucks.  It took a little bit of encouragement, but Omi got Ben to climb up inside the cab.  Ben liked sitting in the big seat and pretending to steer.  He tried to beep the horn, but wasn’t overly thrilled when it actually made the loud sound.  He enjoyed looking at the ice cream tuck with a giant sundae on top.  They had a spoon bigger than Ben for the the kids to play with!  As more kids starting coming to see the trucks and it got louder and busier, Ben got a little overwhelmed.  He didn’t want to climb on any more trucks, so we looked at the others and moved on. 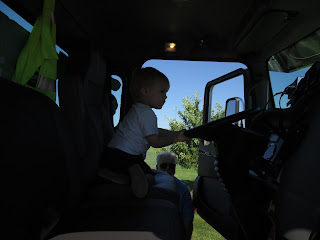 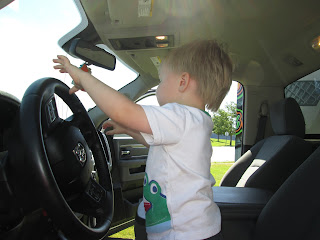 After the trucks we hit up the petting zoo.  Again Ben grabbed Omi and went right for the gate, leaving us girls in the dust.  And again Ben wasn’t super into actually touching the animals, but did enjoy looking at them all.  He seemed to enjoy looking at the piglets and the bunnies the best.  No surprises there, he has always been a fan of bunnies.  Piglets are just adorable as well.  After the petting zoo we wandered around a bit.  I tried to get him interested in the magic show in the children’s tent, but no dice.

He did show interest in the ponies they had for pony rides.  He ran right up to look at them.  He wanted to go right in and touch them.  I took him to the line to start to wait to get to ride them.  I wasn’t sure he actually wanted to ride the ponies, but figured we could use our wait in line to talk it out.  Ben wasn’t too keen on the whole ‘wait’ thing.  He hasn’t had to wait in too many lines, so it was good practice for him.  Honestly I thought we would get in to see the ponies and he wouldn’t want to actually ride them.  But as I said, waiting in line was good practice for him.  Meo and Omi didn’t seem to mind, and the girls had fallen asleep at that point.  Ben did really well with the wait!  We had some water and talked about how waiting was hard, but he had to do it sometimes.  He was super excited when we finally got in to see the ponies.

Ben willingly let us put him up on a pony named Nugget.  It was a sweet little guy who gave me a nice nuzzle.  Ben was so cute, and called out Yee-haw!  (We’ve seen a lot of cowboy episodes of his favorite shows lately.  A nice little coincidence for pony rides.)  Once the ponies actually started walking he was not as into it.  I kind of had to hold him on the saddle.  But he didn’t cry, and I think over all he did enjoy it.  He was a little nervous, but did really well.  I was so proud of him that he actually rode!  I love watching him try new things, even if they are a little scary for him.

After the pony ride we wandered around looking at the expo booths.  We ran into a bunch of people that we knew and said hi to friends.  By that point we were pretty ready for lunch, so we headed back to Meo and Omi’s house.

Saturday we headed back to the fest, this time with Pat!  Ben was super excited to be back!  We walked through the midway area a little bit.  Ben is still way too young to go on most of the rides, and we are avoiding the games until he actually asks to play them.  (Even then we probably won’t play too many.  I agree they can be fun, but they can be expensive!)  Ben happily took Pat in to the petting zoo.  He actually pet a couple of goats!  Ben takes a little time to warm up to stuff sometimes, and it was great to see him enjoying the animals.

We were able to catch the Lumberjack demonstration.  I know it sounds funny, but it was pretty cool to see!  They explained the rules of the different competitions and why they worked the way they did.  Ben didn’t like the loudness of the chainsaws, but I enjoyed learning more about it.  We didn’t stay for the whole thing, as Ben was getting antsy.

Ben rode his first real ride at the fest this year!!  He was very interested in the little train ride.  We weren’t sure he would be tall enough to ride, but he just barely was.  We have a little kid carnival rider on our hands!!  He was so excited, which was adorable to see.  I was lucky enough to go on the train with him.  Wow, I barely fit.  Those things really are for little kids.  At first Ben was pumped, then he seemed surprised the ride would move with us on it.  He was nervous for a few seconds, but came to really like it.  We got to sit up front and he loved looking at everything the train had.  He liked waving to Daddy and the girls too.

After the ride we wandered around the expo a bit more.  We ran into a couple of friends who hadn’t met the girls yet, which was fun.  I think the ladies enjoyed themselves.  It was very sunny and warm, so we had to work to keep them in the shade.  We didn’t spend as much time at the fest on Saturday for this reason.  I’m sure I was overly worried, but they are still so young.  Add to that they don’t drink water yet and can’t really tell us that they are too hot and I prefer to err on the side of caution.  Ben was getting hot at this point too so we headed home.  We managed to do everything we wanted to though, and had a ton of fun while doing it!

Another great fest is in the books!  You can see last year’s prairie fest here.  In 2014 we did the Diaper Derby, which you can see here.