This weekend we attended an event that I think most little boys would love- Rail Fair!  I am so excited that we have a railroad themed park near by our new place!  This particular weekend had a big model train festival, and most of the park was free.  Score!

After the girls morning nap we headed out to see the trains!  As soon as we got there Ben was pumped.  He pulled Pat ahead with him while I followed with the girls.

There were a bunch of model trains set up.  Ben really liked looking at them.  A couple of them even had Thomas and his friends in them!  Those were big favorites with the little ones.  It is kind of crazy the things that interest you because your children like them.  I can’t really say I’ve put a lot of thought into model trains.  But watching Ben be so excited and interested in them made me really like looking at them too. 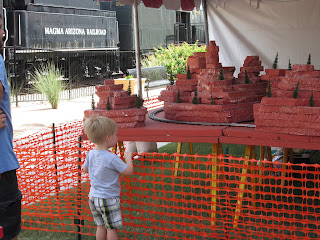 They had real train cars set up to go through.  Sadly they aren’t stroller friendly, so I waited outside with the girls.  They didn’t mind missing out.  Pat said the cars were interesting to look at, but not super fun for little ones.  A bit too historic for Ben’s taste, so I will wait until we go again to check it out.

Ben was fascinated by all the model trains!  There was a small museum full of more models.  Again though, not stroller friendly.  Ben seemed really excited after he and Pat went through it, and Pat said it was fun to see.

We took a break to eat a little lunch at the park.  They have food available, so we splurged and got Ben the rail park ‘happy meal’ of sorts.  It came in a little train car and had a whistle.  I think getting to eat some chips was Ben’s favorite part. 😉

The park has two playgrounds, both train themed!  We actually only made it to one, but it was a good one!

I think the highlight of Ben’s day was getting to ride on the little train that went around the park.  He looked so proud and excited to get to ride on a real train with Daddy.

I think the rail park might be one of Ben’s favorite things about living here.  We will for sure be visiting again.  The one bummer is that so many of the displays and things to do aren’t stroller friendly.  But that’s okay.  I’ll get a turn to see everything when we go again.  Plus I have a feeling it is a place grandparents will really enjoy with the kids. 😉  We had a blast and we’re looking forward to going again!!