At the beginning of the summer Ben and I set the goal to go to every park district playground in our town.  Sadly this goal got set aside in order to prepare and carry out our big move.  We did hit up one last good one before we headed out of town though- the Rocket ship Park!
I have to say I am a little bummed to be leaving all the great playgrounds in the area.  That park district really themed some of them out!  You can see the awesome rocket ship.  That thing is 30 feet tall!  We went out early one morning before the girls’ first nap, so we had the whole rocket to ourselves.  It was pretty great.
Ben was so excited when we pulled up!  After our pirate play he had been asking to go on a ship.  I couldn’t find any parks close enough with boats to play on.  A rocket ship isn’t the same thing as a boat, but Ben found it to be pretty amazing.  He raced right off as soon as I had our crew out of the car! 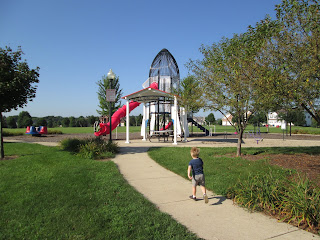 Part of the rocket can be reached by stairs, and Ben had no problem climbing up those.  The upper level had more of a ladder to get up.  I was happy the girls were pretty content in their stroller and that no one else was at the park, as I was able to help Ben up the ladder to reach the very top!  He really enjoyed running around up there and looking out the window.  He ran around giggling for quite some time! 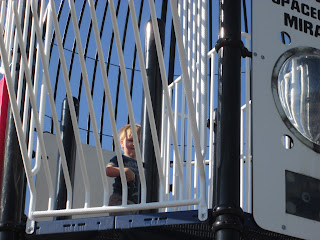 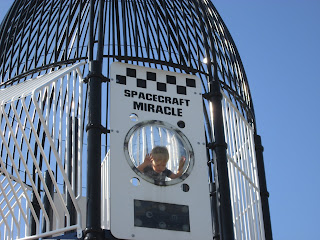 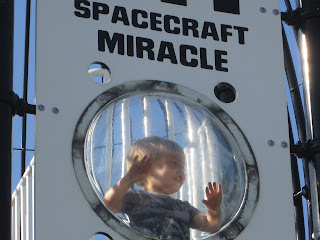 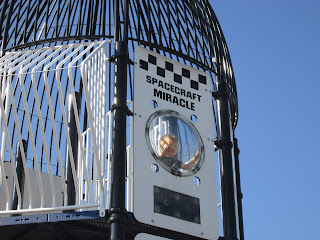 I admit when I helped Ben up the ladder I didn’t really think about how I would then get him down.  There was a big slide to get to the bottom, but sometimes Ben isn’t that into that sort of thing.  He was very good when it was time to go home.  He took the slide down, and I was so proud of him.  I could tell he was proud of himself too.  When he got to the bottom he looked at me with a big grin and said, “All by myself.”  I love the sense of accomplishment in his eyes!  He faced the challenge of the big slide and totally nailed it.  Go Ben!

I am going to miss the fun parks we found around our old place, but I am excited to explore our new home.  I know we’ll find more great places to play!