Recently Ben got to go to his first birthday party!  Well, his first birthday party that wasn’t for family.  A little boy in our play group turned two.  He had a great party at the local splash pad!  We went to the splash pad once or twice last year, but hadn’t made it yet this year.  I wasn’t sure how much Ben remembered it.  He adored it!  It was a really great party.  There is a playground at the same park, so the kids had a blast playing at both places.  Add in a few donuts and it was a perfect morning!

A good thing about being the second kids- you get some firsts earlier!  Not even six months old and already at the splash pad at a friend’s birthday party.  Lucky girls!  We haven’t had a chance to get the girls into the water much.  Ben still needs an adult with him at all times if he is in the big pool, as do Ali and Sammy of course.  And with two parents and three kids we haven’t worked that out yet.  Our splash pad is great because it isn’t too big, and it is entirely fenced in.  This means we can let Ben run around himself without worrying too much.  We can see him everywhere.  I was super pumped for the girls to wear their little swim suits out and about!  They look like little surfer girls in them.  They are growing so fast they won’t fit much longer.

I carried both Ali and Sammy for a bit, then Pat took Ali while I took Sammy.  They weren’t really into it.  The party was in the morning, so they were sleepy from missing nap.  This particular day was only about 80 degrees.  That would be awesome, but for a water activity it was a bit chilly.  And that water and the pad was COLD!  Sammy looked at us like, this isn’t that great, but whatever.   Ali buried her face in whomever was holding her, I think hoping she was anywhere but there.  Neither cried or anything.  I’m thinking being a little sleepy and the water being so cold made them just not care that much.  Oh well, we tried.

I did make Pat get a picture of me with all three kids!  Ben didn’t really want to hold still for the picture, but lucky for me he is always willing to give me a hug.  I’m usually the family photographer, and I’m not in a ton of pictures.  I really want the kids to have some to look back on to see me interacting with them.  And yes, I would rather play with my kids in the water than worry about myself in a swimsuit.  So, none of them are looking, but here you go kids in the future- Mommy loved playing with you!!

Ben was go go go!  It was hard to get him to slow down! 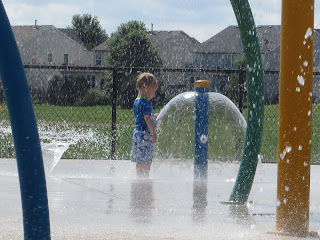 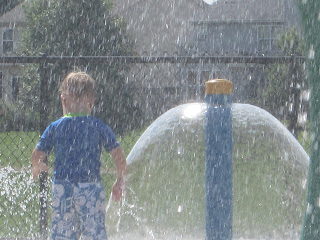 Finally Ben came up to us and said he was cold and ready to be done.  We changed his clothes into something dry and hit up the playground! 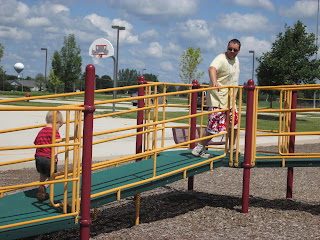 Overall we had a ton of fun.  It was a perfect party for this age range.  The kids could do what they wanted, and the parents and siblings got to play too.  All three kids had so much fun!
–Kim