The girls are ten months old!  We are closing in fast on the big one.  I can’t believe so much time has gone by so quickly!  The girls are growing hard.  They are busy and in to everything.  They are little sweeties and we are so blessed to have them in our lives. 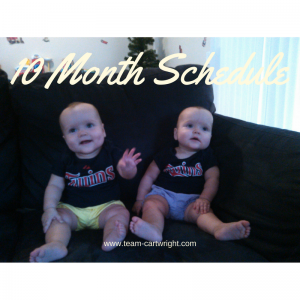 Ali and Sammy still aren’t crawling on their hands and knees, but they are so good with their army crawling I don’t think they care.  They each have their strengths with it.  Ali is our long distance girl.  She is determined and focused.  You have to watch her because she will wait for her moment.  In a total mom fail moment, I have to admit I lost her once this month.  I thought she was playing with Sammy in the living room and I found her playing in her bedroom.  Fortunately our house is pretty safe.  But now I know for sure to keep the hallway gated off.  Sammy is our sprinter.  She is seriously fast!!  Luckily for me she is the one more content to hang out.  But when she thinks she has an opening she is off!  Her favorite place to go is into the kitchen, so she is hard to miss.  I have been employing the gates almost all the time now.  I know it is a little frustrating for Ben to have to ask to get around them, but I need to be able to keep everyone safe!

The girls are good eaters.  Sadly they are getting a little picky already.  I suppose I should be proud of them- they are totally eating at a preschool level. 😉  They are obsessed with raisins and cheerios already.  This comes in handy when we are out and about.  I like having an easy food to take with us places.  I know it isn’t necessarily the healthiest meal, but it by far could be worse.  They love bananas, guaca-hummus, and almost all breakfast foods.  They enjoy peanut butter toast.  They are starting to want bigger pieces of food to eat.  I do have to be careful about this, I don’t want them to choke.  But if it is a food I think they can handle I let them.  They enjoy drinking water out of their cups and like to try to hold them by themselves.  They look so proud of themselves when they do!  They enjoy almost anything I make in the slow cooker, and they like the veggies out of soup.  Otherwise they are already turning on vegetables, which bums me out.  But they do enjoy smoothies and pouches already.  Oh my, do they enjoy them.  If I get one out for Ben I’d better have one for the girls too, or I hear about it!  I aim for the kids to eat actual vegetables and know they are eating them, but I don’t want the table to be a battleground if I can help it.  So I am fully into hiding veggies anywhere I can.  If the girls eat their pouches, I am happy.  It is interesting how different babies can be.  Ben spent his first few years on a self imposed Atkins diet.  He barely liked any carbs!  Both Ali and Sammy already like some breads and crackers.  Even between the girls they have different preferences.  At Thanksgiving Ali was all about the mashed potatoes, while Sammy was digging the turkey.  I love seeing their differences come out!

Sleep is still going pretty well.  Overall I think I can’t complain.  They do have the occasional bad nights and bad naps.  They do know the routine though and go to naps and bed happily and willingly.  I think it is normal to have a less than stellar nap every once in a while.  Ali seems to sometimes have a little fear of missing out.  She goes to sleep, but if she wakes at night she seems to want to get up.  She usually goes back to sleep though.  The big issue with sleeping this month was teething.

Teething.  Oh teething, how I hate you.  These poor girls were cutting the front four top teeth all at the same time this month.  They were so uncomfortable.  Understandable it messed with their sleep a little.  It appeared to mess with their eating a little too.  Ali was less in to solids for a bit, and when she did eat them she liked the softer food.  Sammy was the opposite- she didn’t want to nurse a lot and wanted more solids.  So again, interesting to see the differences between them.  I am happy that these are my second kids and that they are twins with the nursing.  Sammy had a couple days where she really didn’t nurse much at all.  I offered at all the normal times, but she only suckled for a few moments then wanted off.  I remember Ben going through this, so I knew it was normal.  I wasn’t worried if she didn’t nurse a ton for a day or too.  I was happy Ali wanted to nurse more, so I just made sure to alternate sides that she was on to keep supply up.  Sure enough, Sammy was back to normal in about a day.  The teething meant we spent several days just cuddling and trying to keep the girls happy.  Those were some loooong days, and they were days when having twins was just hard.  When your baby is upset and hurting you just want to hold them, and that is hard to do with two little ones needing to be held and loved on.  But we made it through.  Once teething took a break my little sunshines were back to their happy selves.

This month the girls celebrated their first Halloween!  They weren’t super in to their costumes, but they had a ton of fun at all the Halloween activities we went to.  We hit up several story hours at the library.  I like going to those because the girls seem to like the stories too!  It is still easier to keep them in their stroller at that type of event, but they are actively watching the leader and paying attention to what the other kids are doing. I like to think they are getting something out of it.  This month they were great helpers getting some early holiday shopping done.  They enjoy being out and about, even when they were teething.  It is getting cooler here (finally) so the fresh air makes them happy.  The girls got to participate in their first election.  That was a day, but they were there with me to vote!  They finally had their nine month check up, on the day they turned ten months but what can you do.  I hate that but with the move it was the best we could do.  They are healthy and growing strong!!  Sammy is about 3 ounces bigger right now.  It is interesting how they keep switching leads in that.  It is really interesting to watch these identical twins grow.  They have such different personalities, but they physically have so many similarities.  I know, duh, that should be obvious.  But seeing it actually play out right in front of you is fascinating.

Sammy is still our shier girl.  She is fully at ease with people she knows, but she is slow to warm up to strangers.  She took a little time to warm up to Gramma and Grampa at the start of their Thanksgiving visit.  Overall I can tell she is our little introvert of the two.  She is more often content to hang out and play with toys on her own.  She is super fast as I said, but she doesn’t take advantage of it too often.  She likes to snuggle up and observe the action.  She’s a thinker, and waits for her opening when she wants something.  Currently she appears to be going for the kibble.  She can really turn on the speed when she sees me coming to stop her!  Ali is still our outgoing baby.  She likes to get right into the action.  She will come and find me rather than play alone for too long.  She is quick to voice her feelings.  This isn’t all bad, she has the best belly laughs and she doesn’t hold them back.  She is determined.  If she wants something she keeps going after it until she gets it.  She is independent, she will go and seek something out, like going to her room to play.  Both girls are thinkers.  They are going to give me a run for my money as they grow.  They already know when they are going for something they shouldn’t.  They stop and look at me when I say no, but often go for it anyway, smiling and giggling the whole time.  They love to get into their brother’s room and play with his toys.  Of course they like to steal toys from each other.  And no, it doesn’t matter if we have two of something, they want what their sister has.  I try to be as fair as possible with that, but sometimes they have to just work it out themselves.  They love to giggle together, which is the sweetest thing to see ever.

The girls are little sweethearts.  It is so hard when they are teething.  They were really uncomfortable and I sometimes felt like there was just not enough mom to go around.  But it makes me so grateful for their sunny personalities.  When they aren’t in pain, they are such little delights.  And even when they are teething they try to have fun and be happy.  They are funny and playful, sweet and snuggly, smart and feisty.  They make us laugh with their antics.  They loving and lovable.  They adore their big brother.  I am so thankful to have them as my daughters.  They are wonderful girls and bring such joy to our lives.