I haven’t really posted much about the twins yet.  There are a couple of reasons for that.  One is we wanted to wait a bit to make sure that they were doing well before we started talking about them too much.  We have no reason to believe anything should happen to them, but vanishing twin syndrome is a thing.  We just wanted to feel more confident in how they were doing.  The main reason is basically second (and in this case third) child problems- we’re busy.  I know, terrible excuse, but it is true.  When I was having Ben I remember every week feeling like it took forever.  The time between check ups was sooo looong.  Now?  Time is going by very quickly.  We are almost half way there!  I feel a little bad, but I know this is what happens as life gets busier, and when you have a toddler that insists on getting attention all the time. 😉 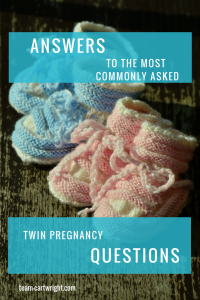 All that being said, I thought I would post some answers to the most common questions I get.

Q:  When are they due?
A:  My due date is currently Valentine’s Day.  However, being twins they will most likely come early.  My doctor said she likes twins to be born around 38 weeks, as opposed to 40.  I am hoping they stay in me and grow for as long as possible.  The longer they stay in the better in my book!  So prayers that they stay put until February are appreciated.

Q:  Do we know the genders?
A:  Not yet.  We will be finding out.  I think it is awesome when people wait til delivery, but that is not for us.  I like to plan and be prepared, and for me that means knowing the gender.  I think it will also help us when talking to Ben about the babies.  Plus, let’s be honest, we got our ‘surprise’ when we found out there were two.

Q:  Are they fraternal or identical?
A:  We don’t know yet.  The way they are currently camped out in there, it could be either.  There are a few ways to know for sure if they are fraternal.  If they are different genders or have different blood types we will know.  There are many ways twins can be arranged in utero.  It’s actually kind of cool to read about.  I won’t go into a ton of detail, since I think most people just want the short answer.  That is- we don’t know.  There is a good chance they are identical, but of course they could be fraternal.

Q:  Is Ben excited?
A:  No?  To be honest, I don’t really think he has a clue what is going on.  So far we haven’t pulled out baby stuff or moved anything around yet.  We do talk to him about that babies.  But, well, he’s two.  If it doesn’t directly impact him right now, he isn’t really interested.  We aren’t worried, he’ll adjust like all kids do.

Q:  Are you moving?
A:  No.  We might be crazy for this one.  We thought about moving to get more room.  However Ben is rarely in his room.  He mainly sleeps there.  The twins will spend a couple of months sleeping in our room.  Once they move out of our room, they will really use a bedroom for sleep only.  And we really want to focus on saving money.  Add to that either moving now while I am able to help and paying for more space than we need or waiting to move in the middle of the holidays, and it just didn’t make sense.  We are going to switch rooms, making our big master bedroom the kids’ room.  It will be an adventure, and I am willing it to work. 🙂

Q:  Were they planned?  Were you planning on twins?  Are they natural?
A:  Oy, these questions.  Frankly how anyone plans a family is their business, so this isn’t my favorite question.  Yes, we planned on having a second child after Ben.  The “were you planning for twins” and “are they natural” are awkward questions.  I know most people don’t mean any harm by them, but again how someone gets pregnant is really no one else’s business.  I know these are touchy questions for some couples, as they are basically code for “did you have fertility treatments?”  I know most of these come from a place of honest curiosity, and aren’t meant to be judgmental.  And I know I have thought them myself.  All that being said, no, we were not planning on twins.  One, I don’t think it is possible to plan for identical twins, if in fact they are identical.  I mean, I don’t think fertility treatments can be sure to make a single egg split.  Two, we did not use fertility drugs.  All babies are natural, so yes, they are natural.  Twins without ‘assistance’ are called spontaneous, and these two are spontaneous twins.

Q:  Do twins run in your family?
A:  Well they do now!  I know this one can be a sneaky way to check for fertility treaments (see above question), but I know this one doesn’t always mean that.  When I wondered that about people, it usually went along with me thinking through my family tree to see if I was likely to have twins.  I can honestly say Pat and I never thought we would have twins.  Meo has twins in her family, but they are people I’ve never met and far enough removed that we wouldn’t consider it running in the family.  In the odd way the world works, Pat actually has twin cousins that are fraternal twins, and we all know Ben has cousins from Pat’s sister that are fraternal twins.  This is all just a crazy coincidence.  In order for fraternal twins to run in families, it has to be passed down through the maternal line.  Think about it, fraternal means two eggs.  The men have nothing to do with that.  Pat’s cousins and our niece and nephew all come from different maternal lines, which obviously is different from the one I am a part of.  So if the twins are fraternal, there is no connection to these other twins in the family.  If they are identical it kind of just happens that the egg splits.  There are no identical twins in our family close enough to consider ‘running in the family.’  Short answer- no.  Twins, despite being present in our family do not run in the family.  We had no reason to think we would have twins, and it is basically a crazy coincidence that Pat’s sister and our family will both have twins.  The world is strange sometimes.

Q:  Were you freaked out at first?
A:  Yes!  Of course!  We had a plan for one more child.  Two at once changes everything.  We are now excited and updating the plan as needed. 🙂

Q:  D you think you’ll have more children after this?
A:  No.  No.  The life plan was two kids, and we are getting a bonus.  I am pretty confident this will be it.  (I reserve the right to change our minds, but it is a big old no right now.)

I think that covers a lot of the main questions I have gotten over the past few weeks.  Overall I don’t mind them.  Twins are exciting and I think people have a geniune curiosity about them.  I know I do, and have asked a lot of these questions myself (if not always out loud).  I do enjoy talking about the twins and Ben.  What mother doesn’t love talking about her kids?  We are looking forward to the new additions to our family.  Of course it will change everything, but I know our lives are just going to get better with these two new sweet babies.  I think Ben is going to be an amazing big brother.  I can’t wait to see him in the role.  We feel blessed to have the wonderful family we have and are getting in the future.

Side note:  I am not a doctor or a twin expert.  I have done a lot of reading on the topic since we found out about the twins, but I am not a specialist.  I think I have my explanations and understanding of how this twin thing works right, but I fully admit I could have gotten parts wrong.  So basically, don’t quote me as a source on how twins run through families or grow or develop or anything.  I’m still learning. 🙂