The weekend we were in Arkansas started off really with two parties!  First, we packed up the kids and headed over to Gramma and Grampa’s house to swim in the pool they had set up.  They also have a swing set in their yard they left up from the previous owners.  The kids had a blast!  They jumped in and out of the pool, played on the swing set, and ran around the yard.  Ben pretty much stayed in the pool, mainly because he couldn’t get in and out on his own.  But also because he just adores being in the water.

After letting the kids tire themselves out, Aunt Lindsay and I left the husbands in charge and went to her local resale event.  Oh my goodness, it was huge.  I found some great things for both Ben and the twins though.  It’s hard not knowing the gender yet, but I found some great stuff in the boy section that could look really cute on girls too.  Thanks for taking me with you to the sale, Lindsay!

The evening, we had celebrated Ben’s birthday!  With traveling so close to his birthday, Ben will actually be having three small celebrations instead of one big one.  This first one was with the Arkansas relatives.  Lindsay, Chris, Gramma, and Grampa were so sweet.  They got Ben a super cute Mickey Mouse Clubhouse cake.  He blew out the candles and we all enjoyed the cake.  Then he got some great presents!  Thank you so much to everyone for showing Ben so much love.  He really enjoyed his party and loves his gifts.  We’re so blessed to have great family. 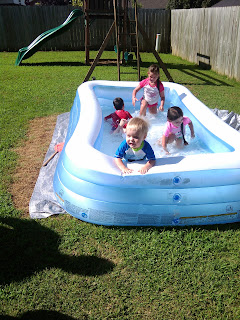 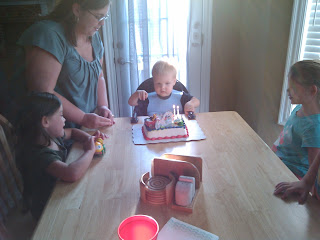 It was another great day. 🙂