We have two posts up today on Stranger Danger.  I’m posting, and we have Natasha from let’s be brave.  Natasha is our newest BFBN member!

Natasha has a great point about calling people strangers:
““Tricky people” have replaced “strangers” at our house.  Why?  Because it’s just a fact of life that you’ll have to talk to and interact with strangers.  I have a friend whose son refused to speak to his kindergarten teacher and ended up getting sent to the principal’s office because of it.  The principal called my friend and put her on speakerphone.  When she asked her son why he was being disrespectful and rude by not talking to his teacher, he said, “She’s a stranger!  You told me not to talk to strangers!”  HILARIOUS!  But also proves my point – we’re all gonna have to talk to strangers.”

I think I’m going to adopt this first part and start talking about tricky people as opposed to strangers.  Beyond this she has a great acronym for personal safety to work on with children.  It is hard to know how much to tell to Ben, since he is still so young.  I don’t think he is too young to learn “No, go, tell” though.  I love how short it is!  Perfect for toddlers.  Read her post to learn more! 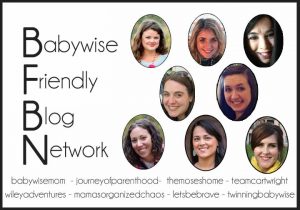 Be sure to check out all the posts on Stranger Danger this week.
Monday: Val at Chronicles of a Babywise Mom
Tuesday: Emily at The Journey of Parenthood
Wednesday: Kimberly at Team Cartwright
Wednesday: Natasha at let’s be brave
Thursday: Carey at Wiley Adventures