The girls have been go go go this month!  They are adjusting so well to out new house.  Moving couldn’t have come at a better time- the girls have more room to roam around! 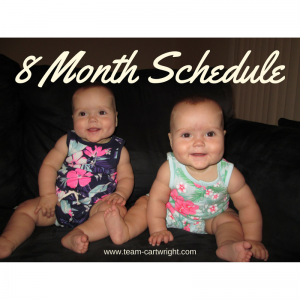 One of the biggest things with the girls this month is how much they are moving around.  They aren’t officially crawling yet.  They keep trying to get on their hands and knees, but can’t quite do anything from there.  They do army crawl and roll and scoot like you wouldn’t believe!  Ben didn’t start really getting mobile until close to a year, so I am a bit surprised by how early the girls seem to be doing it.  Of course they have Ben to set an example of what to do.  They also have Ben’s toys to motivate them. 😉  They love getting into his stuff.  I fully admit I wish they stayed in one place a little bit longer.  But it is fun that they can get around a bit and play with each other.  They are getting a little frustrated that they can’t get on their knees yet, but it will be happening soon I’m sure.  I am happy we set up this place to be super baby safe right away.  These girls are into everything!

The other big thing this month is solids.  We really picked it back up now that we are settled.  The girls had their first solids at six months, but really I don’t think they were completely ready yet.  This was actually a blessing, as we got through the move without having to worry about giving them solids on top of everything else.  Now they are ready and super into it!!  The girls have breakfast, lunch, and dinner with us most days.  They are so cute when they eat.  I love these early stages of solids.  The girls are just so happy to be sitting at the table and eating with us, they eat everything!  Of course it is ridiculously messy, but that is expected.  So far they have liked everything we have given them and are doing really well with the self feeding.  We have started giving them a little bit of water with their meals.  (This is important as they aren’t eating purees.)  They adore trying to drink the water out of the bottles.  They end up wearing more water than they drink, but it is cute how much they enjoy it.  They currently eat most of their meals in just their diapers, so I don’t have a lot of pictures of them eating.  I love seeing them try new foods, and I love that all five of us can sit together at the table at meals!

The girls still babble and frankly yell a lot.  They are so much louder than Ben ever was!  They just have a ton to say and want to be sure everyone knows it!  They are starting to ‘talk’ to each other more.  They actually look at each other and seem to be carrying on conversations sometimes!  It is so sweet.  I have no idea what they are saying to each other of course, but I love seeing them acknowledge each other.  They still like to play together and steal toys from each other.  Now that they are scooting around they can get into the toys more.  Ben is being pretty good about this.  He doesn’t like when they play with some things, but he is learning to share more.

Ali is still the more outgoing of the girls.  She has a quick smile.  She is a bit of a firecracker, even at this young age.  She is quick to let you know she is unhappy.  But she is quick to bounce back to smiling as well.  She tries hard to reach her goals.  She is the one you can see reaching and trying to get on her hands and knees.  She is determined to get what she wants and keeps working until she does.  Sammy is still the quieter girl.  Don’t let that fool you though, she is just as determined as her sister.  She makes this little face with her lips pressed tightly together and you know she is working on something.  Her efforts aren’t as visible as Ali’s, but you can see her thinking then suddenly she can do something new!  She also makes that little tight lipped face when she is trying not to smile.  Between Ali’s early feistiness and Sammy’s early determined nature I know these girls are going to give me a run for my money as they grow!

The schedule has changed slightly this month.  The girls get up a little earlier.  This is because they just weren’t making it to 7:30 anymore.  I had been holding out on moving their wake time because I enjoyed having the early morning time with Ben, but I knew they would eventually be getting up early anyway.  So we went with it.  Of course if they are happy in their beds we wait until 7:30.  We have also added the solids as I mentioned before.  We are fully back in the time where it feels like everything we do revolves around food.  Meals take longer and clean up is way more involved, but we are enjoying it.  Here is the basic run down of the girls’ day.

Eating solids is going great.  Nursing is going well.  They are getting pretty quick at it.  Nighttime sleep is going well.  They crash hard at bed time.  I think that is in part because we have had a couple of rough nap times.  They are working so hard on crawling and they are teething, so I am trying to keep nap times consistent while being understanding of all the reasons they are waking early.  Overall they are doing pretty well though.  I don’t want to make any major changes until we get past these big developments.

In other happenings Sammy has her first tooth!  Lower left is through the gums!  The one next to it is working hard to get through too.  Ali almost has her first one through.  I can see the bump on her gums, it just hasn’t broken out yet.  Sammy and Ali can sign milk to me!  They have started to use the sign to indicate they are ready for their water at meal times.  I can tell they understand the signs.  They get all excited when I sign milk, and they start rubbing their eyes when I sign tired.  I am trying to use more and all done at meal times, but with three kids eating sometimes I forget.  I am so happy they seem to be getting the signs.  Ben did really well with them , and I really do think it helped curb tantrums when he was younger.  I love seeing them understand and try to let me know what they need!

Ali and Sammy are such delights.  Yes, they are loud and into everything, but they are so fun.  They love to laugh and play with us.  It is so fun to see them interact with each other and their brother.  They are determined, sweet, happy little girls.  We are so lucky to have them in our lives.