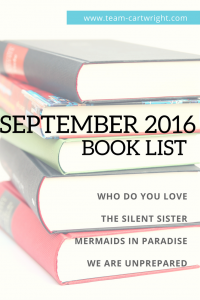 As soon as we moved into our new home I did the most important thing you have to do when you move to a new place- got my new library card.  🙂  We’re still getting to know our new library system.  It was hard to leave our last one, it was a really great library.  We miss our librarian friends and all the great programs and toys they had.  The new library is small, but it is a county wide system so I can still get a lot of great reads.  Here are some of the books I enjoyed this month. (This post contains affiliate links.  All opinions are my own.)

Who Do You Love

This book starts with two kids meeting in a hospital.  Rachel, the girl, has a heart condition and Andy, the boy, broke his arm.  A few years later they get thrown together again and start dating.  They start dating, break up get back together, break up, the usual story.  But it is a sweet one.  The two of them grew up very differently, and it is interesting to read how those differences shape them.  What I liked about this story is that each character is challenged on their own, and we get to see how that impacts their relationship.  They have flaws.  Their reasons for separating weren’t always huge, and were almost a little petty at times.  But that is what I think made it realistic.  They were normal people trying to do good in their lives, follow their passions, and find love.  I enjoyed this one.
The Silent Sister

Riley grew up thinking that her sister had killed herself when Riley was almost two years old.  Her sister, Lisa, was a violin prodigy and the stress of all the performances caused her to become depressed.  When we start the book Riley’s father has just passed and Riley is taking care of closing up his house and going through his things.  While trying to go through everything she learns that her sister had killed her former violin teacher and might have faked her suicide.  (Spoiler alert- she did.  But if the sister was dead the story would be pretty quick.) We go back and forth from Riley’s perspective to her sister’s.  The two sisters also have a brother who has a totally different perspective on how everything went down.  I liked reading how three different children could view an event from such different angles.  True, they were all different ages.  But how we remember our childhood isn’t the same as how our siblings remember it.  We all have upbringings that are unique from our brothers and sisters.  This is one of those stories where no one is really ‘right’ per se, but you understand why they do what they do.  It was a page turner and I think I’m going to add it to my read again list.
Mermaids in Paradise

Okay, this one was not one of my favorites.  I think it just isn’t a style I am looking for right now.  A couple go on a honeymoon to a tropical island, and yes as the title suggests they find mermaids.  The resort company tries to cash in on the mermaids, and the main characters work to stop it.  Honestly I found our main characters a bit grating.  I understand the author was going for satire and it wasn’t meant to be a warm and fuzzy book.  But I quickly got tired of reading the internal judging of the world from the main character and her negative attitudes.  I don’t want to say it is a bad book.  I always think it is good to read outside of my comfort zone and to think about life from points of views very different from my own.  I just could not get behind the skewering of total strangers the narrator did while thinking she is so superior to everyone she met.  Plus there is a twist at the end that just didn’t fly with me.  Like I said though, it is always good to get outside of the usual reads, so I’m not disappointed I read it.  I am just very happy I got it out of the library and didn’t spend money on it.

A couple, Ash and Pia, move to rural Vermont to live a more ‘real’ life.  After they move there a super storm develops that is bigger than anything anyone has ever seen.  Ash and Pia approach preparations for it in two different ways.  Pia falls in with a group of preppers, while Ash tends to align with the local government more.  While they are preparing for the big storm, their marriage starts to fall apart a bit.  The story is really one of how their marriage drifts.  It feels as though it would have happened anyway, but the storm is a major catalyst that can’t be ignored.  Overall I enjoyed reading about how different people prepared for the major disaster.  I found it to be realistic and really cover many ways people face this sort of life changing situation.  It’s really more about relationships than the disaster.  The storm kind of falls into the background.  I found it interesting and would recommend it.

Four new books to check out.  Okay, three new books and one I didn’t like that much.  But that could be just me.  As always there are affiliate links in this post, but that doesn’t mean it costs you any extra money if you chose to purchase them.  All opinions are my own.  I’ve already started a few new books to get ready for October.  Maybe I’ll try to find something scary for Halloween…

Transitions: Moving from a crib to a toddler bed
Read Next Post →
Click here to cancel reply.