Fed Is Best: Our story

I’ve written a few posts about breastfeeding.  I feel that breastfeeding is wonderful and yes, has amazing benefits for mom and baby.  I want to support all moms who want to and are trying to breastfeed, especially my fellow twin moms.  But there are a lot of factors that go into feeding babies.  There are a lot of reasons why breastfeeding just doesn’t work out.  While I love the support for nursing sometimes I wonder if the pressure to do so  has gotten to be too much.  Is formula really the end of the world?  Do moms need to feel guilt for the simple act of feeding their babies?

The thing is, I don’t often mention that my girls supplemented with formula when they were born.  I don’t know if it is because I feel embarrassed, or guilty, or somehow less of a mom because I gave my girls formula.  Chances are it is all three.  And that isn’t right.  I am not less of a mom because I fed my children a nutritionally sound and appropriate food.  When I found out about the Fed Is Best organization I knew I wanted to share my story of how supplementing with formula doesn’t have to mean the end of the world.  It doesn’t even have to mean the end of breastfeeding.  Feeding your babies breast milk or formula shouldn’t be the benchmark for how good of a mom you are.  It should just be about providing proper nutrition.  I am glad I made sure my girls’ needs were met.

(This post originally appeared on the Fed Is Best blog in April, 2017.) 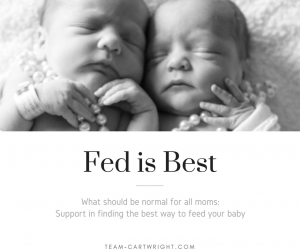 My story is unremarkable but important to tell, because we are often led to believe that it should be remarkably rare.

In 2013 I had my first child, a son.  I researched and knew I wanted to breastfeed him, as breast milk is the recommended food for babies.  There are so many benefits to baby and mother if you nurse, so of course I wanted to try it out.   Plus it was the free option!  I have to admit that was a big push to learn all about it and make it work; and we did make breastfeeding work for fourteen months.  Then in 2016 I had my second and third children, my twin daughters.  I knew I wanted to breastfeed again.  The cost benefit for me personally was huge, especially for two babies.  But nursing two babies at once–that’s a lot!  There are a lot of reasons breastfeeding doesn’t work, and you double those when there are two babies.  I was determined to do my best though.

My girls were born at 36 and a half weeks.  Early by the forty week schedule, but basically on time for twins.  (Full term for twins is considered 37 weeks.)  They were right on target for identicals.  I was worried they wouldn’t be able to latch or just wouldn’t nurse well.  Imagine my relief when shortly after both girls were born, they both latched right on and were nursing away.  They knew what to do and we didn’t have any problems.  The only issue was with their blood sugar.  They were still a bit early and of course small.  As per the protocol of the hospital I was at, the girls had to have their blood sugar checked with every feed.  They did pretty well, but their numbers weren’t as high as the doctors and nurses would have liked.  The nurses offered me a simple solution–after I nursed we were to give the girls supplemental formula.  It can take a few days for a mother’s milk to come in.  Yes, my girls were getting colostrum, but we were concerned that I wasn’t able to provide enough in terms of volume for two babies. For the two days we were in the hospital we offered enough formula after each nursing session to keep their blood sugar levels normal and safe.  Once we got the girls home my milk came in. Fast forward thirteen months later and we are still nursing.

This doesn’t sound like anything, does it?  That’s because it shouldn’t.  My girls needed a little more than I was able to provide.  Medical professionals recognized this and offered the appropriate help–formula supplementation.  Once my body caught up to me having two babies, we carried on nursing.  A few days of supplementing didn’t hurt my nursing relationship with my girls.  They were able to stay healthy and satisfied with the help.  I have exclusively nursed my girls ever since with no issues.

I had a few things really going for me to make this happen.  One is that I had successfully nursed a baby before.  Two, I knew I was having twins and had researched nursing twins extensively.  I had taken a class on having multiples and educated myself on all the challenges behind nursing twins.  Three, I was a second time mom. I was more confident in my ability to be a mother and more willing to advocate for myself and my children.  I had the support of my husband and doctors.  Finally, I was having twins.  Having multiple babies changes the equation for a lot of reasons, but one specifically is that it’s expected you won’t be able to nurse well.  It’s just too many babies.  It was assumed that some formula would be used, so no one thought to pressure me to exclusively breastfeed.

Why is exclusive breast milk so vital for singletons that moms need to feel terrible for offering supplementation, but with twins it is more than acceptable?  Are twins getting second class treatment?

No, it’s that there is so much going on when you are a new mom of two that people realize formula is not a vile poison that needs be avoided but rather a safe and legitimate food option. It was expected that I might have nursing issues and so supportive safeguards were put in place.  This is a sentiment that should be extended to mothers of singletons as well.

My story is unremarkable in that my babies got the extra help they needed without anyone thinking we were doing them a disservice. We didn’t have any trouble getting back to nursing and my girls thrived.  What makes my story important, however, is that it clearly demonstrates how a mother can be encouraged to nurse while acknowledging that some supplementation is needed.  I wasn’t judged for not trying hard enough.  I wasn’t made to feel bad because I wasn’t producing as much milk as I needed to be for my girls.  Something, I might add, which was entirely out of my control.  I wasn’t made to feel like less of a mother because I was open to another way of feeding my babies. None of that should have been based on the fact that I was having twins, but because it is the right way to treat mothers and protect families.

My story is a success story, and it is remarkable because it shows, contrary to what is often said, that we can support women in utilizing all the safe methods out there to feed their babies without ‘ruining’ breastfeeding relationships.  When I look at my children playing with other children their ages, I can’t tell who was breastfed and who was formula fed and who used some sort of combination.   New mothers have a lot to deal with.  They need support and understanding, not guilt and pressure.  I think breastfeeding is great.  I want to tell women who think they have no chance at nursing twins that it is possible!  But I also want to tell each and every woman that breastfeeding is not the only way to be a good mother; not breastfeeding does not make you a bad mother.  I think we need all mothers to support one another; breastfeeding, formula feeding, combo feeding, it doesn’t matter.  We are all trying our best to take care of our children.  If breastfeeding doesn’t work, that is okay.  Feeding your child and helping them grow and thrive is what matters.  Loving your child is what matters most. 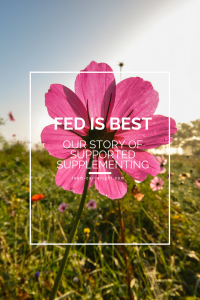 I nursed Sammy and Ali for two more months after this originally posted, making it to fifteen months.  At that point all three of us were ready to be done with it.  My girls are healthy, growing, and bring joy to our lives.  I write about breastfeeding because that was my experience.  What else would I have to write about?  But that does not mean that is the only right way.  I do want to give encouragement and support to all moms, especially twin moms, who are nursing.  But more than that I want to give support to all moms, whether you formula feed, breast feed, or use some combination.

I want to thank to Fed Is Best organization for sharing my story and for helping so many other moms.

Why Joining a Mom's Club Was One of the Best Decisions I've Made
Read Next Post →
Click here to cancel reply.

I was able to breastfeed all three of my children but not all are as lucky as to be able to do that. There can be various problems that may get in the way or various reasons why another choice is made. It is not for us to judge. Fed is best!

Ohhh, mama, you know I am with you 100%!! Fed is best! How society has failed us that you breastfed your twins for FIFTEEN MONTHS and still feel guilt from offering formula for two days. You are a rockstar mama and have done such an awesome job! Thank you for this post ?

I completely agree that Fed is Best and there is nothing wrong with supplementing. I formula fed my firstborn because we could never get him to latch correctly, and he was born with blood sugar issues and in the NICU for 4 days as a result. My second-born breastfed like a champ from the beginning, but now at 9 months old, I am starting to wean her. Thanks for sharing your story. I think no mother should face judgement over whether or not she is able to breastfeed.

Absolutely LOVE this post!! I'm a twin mom too! My twins were born at 34 + 1 and basically for what feels like a million reasons, breastfeeding didn't work out for us. It's funny how even almost four years later I'm still super sensitive to the fact that I "failed" at breastfeeding my children (something I had always dreamed of doing). Again, I know that's silly and Fed is Best, so thank you for sharing your story and spreading the positive message :)