I want to try to keep events in chronological order.  But this past week got busy with anniversary happenings.  This is actually a post I wrote over a week ago.  I was hoping to get a picture of Ben’s tooth, but for some reason he doesn’t like me prying into his mouth.  Crazy, right?  😉  He is quickly getting his second tooth, so here is the story of the first. 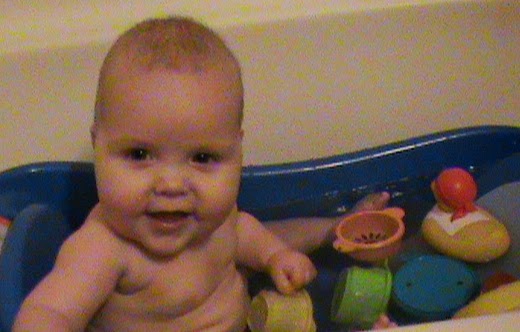 March 12
I have thought Ben has been teething for some time.  He is a drool machine.  I know, all babies drool.  But wow, the kid can soak through almost 3 bibs in a day!  He loves to chew on everything.  Anything he touches he tries to get into his mouth.  These are big signs of teething.  But they are also just big signs of being a baby.  A little over a month ago Ben had a rough couple of weeks.  Most of the time he was fine.  But he would go through periods of just being extremely fussy.  He was on and off crying, and would not let me put him down.  He was clingy and just very unhappy.

Now I know, this just can describe any baby at really any time.  But it is so not Ben.  He is generally a very happy, easy to care for little guy.  Pat and I are so lucky with him.  He is actually very independent, which is kind of strange to say about a baby.  It is the truth though.  He will sit and or lie on his play mat and play with his toys by himself.  He has never been a baby to fall asleep in someone’s arms.  (I know it’s a good thing he likes to sleep in his crib, but every so often I wish he would sleep in my arms!  But he hasn’t since he was a few weeks old.)  In fact from a few weeks old when we would put him down to bed he would start to push away from me and lean towards his crib.  He likes to do things on his own, and likes doing his own thing.  We don’t leave him unattended or anything.  I mean, he is only 6 months old.  We play with him a lot.  But he is quite content playing with his toys with Pat and I nearby.  This is great when Ben and I are at work.  Moral of the story, Ben is not a clingy baby.  So these clingy days were very out of the ordinary for Ben.  Just ask Meo and Omi.  I though we were going to have to leave work early a few times.  It got that bad!

Of course after those days of rough waters, Ben got right back to normal.  Except for the drooling and chewing on everything.  The drooling has only slowed up because Ben has gotten super into his pacifier.  It plugs up the flow.  🙂  After his rough weeks I kept checking his gums.  His bottom gums had teeny tiny white spots on them.   Pat didn’t think there was anything there, but I know there was.  After some time, I kind of stopped checking.  I run my finger through his mouth every so often to get him used to it for future teeth brushing.  But strangely enough, Ben doesn’t like when I try to see into his mouth and put my fingers in it.  Shocker, right? 😉

Well it was bath night, so I was checking his mouth.  And sure enough, there is a tiny tooth!!!  It is his bottom right front tooth.  It is just barely peeking out over the gum line, but it is there.   Pat even saw it!  I thought about taking a picture.  But it is hard to get him to open his mouth to see it.  I am trying to teach him to open his mouth and say aahhh for me.  Besides being able to check out his teeth and general oral health, it makes it easier to see if he has finished all his food.  Those cheeks can store a lot! 😉  So far it is not working.  I open my mouth and say aahhh at him to show him, and, well, he just laughs at me.  I guess it is pretty funny.

So another first checked off the list.  This is going too fast!  I know every parents says that, but it is so true.  I can’t believe my little baby already has a tooth.  He’s already eating solids.  He’s sitting up on his own.  He’ll be crawling before we know it.  Sigh, my baby is growing up too fast!