Good Dads: Giving their time and their love 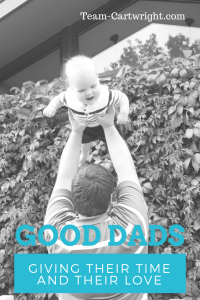 The other day I was putting some clothes away in my bedroom and Ben came running in to ask to watch a new show.  No big deal, right?  It was a Saturday and he was getting his allotted screen time.  The girls were napping still, and I was just finishing up a few chores.  The funny part is that Ben ran to get me when sitting on the couch not even two inches away from the remote was Pat.  Now this is not a commentary on Pat’s parenting.  Ben didn’t say a word to him, just ran off to find me.  And this isn’t the only time things like this have happened.

For some reason it just doesn’t occur to Ben to ask his dad for things, he automatically asks Mommy.  I know he isn’t the only kid who thinks this way.  I for one am still guilty of calling Omi just to ask where Meo is.  Oh, if I have a specific question I will call him to get the answer.  But when I’m calling just to chat, sadly my default is Meo.  Ben and the girls are currently in that default too.  If anything is wrong they will let Daddy handle it, to a point.  When they are very upset they just want Mommy.

I think it is easy for a dad’s contributions to be set aside.  I know in the early years when physically babies just need their mothers (hello breastfeeding) dads can seem like they don’t offer as much.  Just look at all the ads that show dad as the bumbling parent while mom runs the show.  The thing is I know this isn’t the case.  It for sure isn’t for the dads I know.  I want to share a few things I notice about both my dad and Pat as a father.  I don’t know if I’ve said thank you enough to them for these things, but I do notice and appreciate them.

My dad tells me that he missed large parts of us growing up.  He was building up his business and was just frankly working all the time.  There was a period of time when I was super little that he actually commuted from the midwest to Florida every week for work.  So yeah, I bet I didn’t see a lot of him.  That isn’t what I remember though.  I remember that he was my soccer coach every single season until I was in high school.  He basically taught me and all my friends the game- the rules, the skills, and the strategies.  He coached my brother too.  When I was older he told me he had never really played before he started coaching.  He learned how to do all this in order to teach us.  That takes time.

My parents were those parents that were at everything my brother and I did.  I think a lot of teens might have found that annoying, but I don’t really remembering it being like that.    There is one particular game I remember.  It was  sophomore year and we had a soccer game.  Middle of the week away game, so usually there weren’t a ton of parents there.  No one really minded, we were playing because we liked it and had fun.  It didn’t matter if people were there to cheer us on.  But this particular game no one was on our side across the field.  Just as the game was about to start, one person walked up to the field and stood to watch us- my dad.  He was the only parent there.  I don’t want this to seem like I am calling out other parents.  Who knows why more weren’t able to make it.  But the thing I remember is that of course my dad was there.  He wouldn’t have missed it.

My dad has always been serious about his business.  Appropriately so, he built it from nothing and found a lot of success.  He had his own office for almost as long as I can remember.  That office was a place of business first.  We were allowed to have fun there, but generally we did not make a mess.  I remember getting to color and fly paper airplanes, but you bet we couldn’t get too crazy.  Then came Ben.  Dad didn’t hesitate when it came to letting a newborn baby into his office.  The file room became a nap room.  My work was interrupted at various times to nurse or just take care of Ben.  Toys were everywhere!  I tried to keep it clean, but as Ben got older his stuff just exploded.  And Dad never seemed to mind.  His family came first, not his business.

One last Omi story.  This one should be familiar if you have been reading my blog for long, but if you are new (Hi!  Glad you are here!) I will recap.  Last August we moved cross-country, about 1700 miles.  Pat had to leave before we could pack up the house, which left me alone with  a 2-year-old and six month old twins.  You can bet Omi was over packing and helping out.  Then there was just the drive portion.  Driving our own truck was the cheapest option and the best way to make sure we had our stuff when we needed it.  I was going to drive the van with the kids of course.  I knew I wanted Meo to come with to help out at rest stops.  But who would drive the truck?  I didn’t even have to ask, Omi volunteered.  Besides driving a UHaul through some interesting terrain he had a special passenger with him- my cat.  There just was not room for her in the van with all our stuff.  So Omi drove a truck full of our whole life 1700 miles with my cat alongside him.  And remember, this was in August driving to the southwest.  You can’t leave an animal in a car when you stop, even if it is just a quick one.  Omi carried my cat into rest stops with him to keep her safe.  I really appreciate it.

These are just three examples of what my dad has done for me, no questions asked, no need to pay him back.  It is just three examples of many.  I am lucky that my husband wants to be a great father too, and he is.  We’ve only been parents for just under four years now.  But Pat is already working his hardest to be the best dad he can be.  Every day he comes home from work he has three little ones who light up at the sight of him.  What is the first thing Pat does?  Dive right in and start playing with them.  It doesn’t matter what kind of day he had, he is right into dad mode.

I think in every family you have to find your own balance.  I am good at the logistical aspect.  Meal planning, nap scheduling, planning activities- these are the things I am good at.  This can make it seem like our parenting is unbalanced, but I assure you it isn’t.  There is so much more to parenting than just putting food on the table and putting kids to sleep.  Pat has that spark to initiate imaginative play.  He wants to take the kids out into nature and show them the world.  He runs and plays and makes them happy.  Don’t worry, he isn’t just doing the fun stuff.  When our kids are sick I don’t clean up if they vomit.  This is one of those times when they just want Mommy.  I take the sick kiddo, get them changed and cleaned up, and administer the cuddles.  Pat cleans up the mess left behind.  I don’t have to say a word, he just gets it done.

I know he doesn’t need the accolades, but Pat is a good dad.  I see that every day, and I know our kids are lucky to have him.  He has a pretty great role model himself in his father.  I’ve heard the story of how Grampa made a chipmunk trap to save the animals living under their porch at the behest of his daughter.  And of how Grampa is known to be the fixer for Ben’s cousins.  Oh, and how Ben’s cousin Joe wants his hair cut just like Grampa’s hair.  He was also Pat’s best man in our wedding.  That’s a good father son relationship, and a good model for what Pat wants to be.

I think it is easy to try to keep score in parenting.  Who changed what diaper, who woke up in the night more.  But what I remember is the time and the love. My dad showed me both, Pat’s dad showed him both.  And now Pat is showing Ali, Sammy, and Ben both.  These dads were there, these dads saw their children and did everything they could to touch their hearts.  These are good dads.

Weaning Twins: How to bring your nursing journey to an end
Read Next Post →
Click here to cancel reply.

Love this Kim! I'm so thankful to have a great example in my dad and for my kids to have that in my husband too!