I lost: A Halloween Story

I really enjoy Halloween.  I don’t go nuts and decorate a ton or anything, but I really enjoy getting a chance to put on a costume and have a day of fun.  And having a little kid to dress up?  That is awesome.  I know the time period when I can dictate his costume is extremely short, so I want to take advantage while I still can.
Ben’s first Halloween we kept it simple.  Ben was only two months old, and we didn’t want to spend a ton of money.  (That is a theme in our Halloween choices.)  We got a sweet little sleeper with a skeleton on it.  He was able to use it as jammies as well.  Ben was comfortable and super cute.  Perfect. 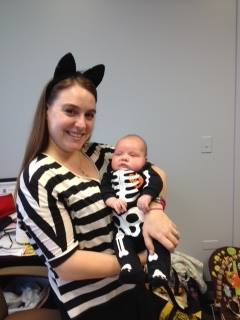 For Ben’s second Halloween, I got a little more into it. I no longer had a newborn, so I was able to put a little more thought into it.  Ben was super into, well, destroying things at this point.  One of his favorite games was to have Pat build towers just so he could knock them down.  He was a perfect little Wreck-It Ralph.  We were able to easily put together costumes for Pat and myself as Fix-It Felix and Vanellope respectively.  We weren’t perfect matches, but I think it came together pretty well.  Ben was able to re wear all his items.  And I only had to buy the tights and the hat for Pat and myself.  Pretty good win there.  I adored having a family costume.  It was so fun and I at least thought we looked super cute. 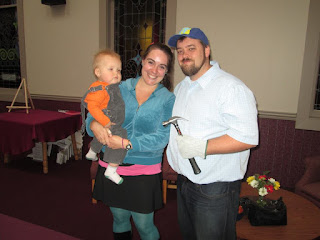 Fast forward to this year.  I’ll admit I didn’t put as much time into costumes this year.  I did want to try to put together a family theme, but I hate spending a ton of money on costumes.  I usually try to build off an idea where we can use stuff we already have.  Well with my ever expanding belly, I have a limited selection of what fits.  Pat had a great idea to have Ben be Batman, and we could be other characters.  Ben has several Batman shirts, and we recently got him a cape and mask to dress up as Batman.  Done.  I was easy.  I could just be a go-to for women- Catwoman. I already had cat ears and could reasonably get away with just wearing black.  Score for an easy costume while pregnant.  Pat was harder.  There are so many people Pat could be.  There’s the Joker, the Riddler, Penguin, Scarecrow.  And that is just a few.  (And yes, I know those are the ones from the movies.  That is where all my Batman knowledge comes from.:) )  The only problem with a lot of them is sadly Pat doesn’t have to wardrobe of a crazed villain.  Most of the time I am happy about that, but this was not one of them.  We decided to aim for the Riddler, as we thought we could pull that off the best.  I was able to get Pat a green shirt, and we were going to put question marks all over it.  It wasn’t perfect by any means, but it would get the job done.
We just didn’t think about one thing- the toddler.  Ben’s cape came.  It looked so good.  He has black clothes we could dress him in, and he would look awesome.  The mask came with the cape.  It would have looked great, but I wasn’t counting on him wearing it.  Our little threesome would be pretty cute.  We’d take Ben to a couple of neighbors to show him off a bit, get some cute pictures, and call it good.  That is not happening.  Why?  The toddler refuses to wear the cape.  Flat out, doesn’t want it on, cries if you try, won’t wear it.  No one else can wear it either.  Ben doesn’t like that.  This includes stuffed animals.
As he won’t wear the cape, I didn’t dress Ben in the rest of his outfit.  The all black doesn’t do much without the Batman accessories.  He did agree to wear his t-shirt that says I’m Batman. 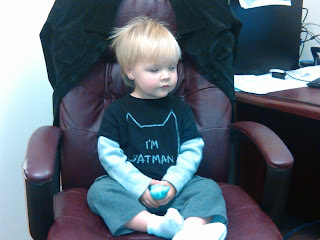 I’m choosing to believe he is taking a Jim Halpert from the Office approach- less is more on Halloween.  At least next year I’ll have the girls to dress up, but they will probably reject my ideas soon enough.  Sigh, I fully admit I lost.  The toddler won the battle of the Halloween Costumes.