No Touching: Why I don’t make my child hug 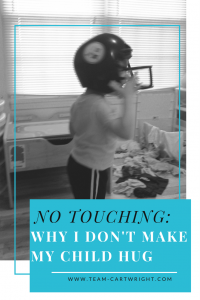 Everyone knows this scenario- A distant relative (or not so distant) comes to visit, and wants to give your little one a big hug and kiss.  The child in question says no and tries to run away.  Often we see the child getting hugged and kissed anyway.  But in real life what should we do?  For me- if my child doesn’t want to hug or kiss you, he doesn’t have to.  I know not everyone agrees with that, but I will not allow my child to be forced into hugging or kissing anyone.

Why I Don’t Make My Child Hug

It is their body.

Why?  It comes down to one basic thing: it is his body.  He has a right to choose who he shares that body and affection with.  It’s hard to think beyond our perspective sometimes.  When we want to hug a child it’s because we love them so much and want to share that with them.  It can be hard to see it from the child’s perspective.  I think about when I visit my nieces and nephew.  I love those kids.  I have known them their whole lives.  I have changed their diapers. I get pictures and updates from my sister in law.  I know all their developments, big and little.  But to them, I am someone they only get to see a couple of times a year.  So while I feel like I know them really well, they may feel like I am a stranger, and not want to hug.  I know I don’t want to hug strangers, so why should they?  I feel the same way with my son.  I know his relatives who live far away love him and have seen tons of pictures of him.  That doesn’t mean that he has the same knowledge of them, and it doesn’t mean that he is as eager for hugs.

I value their feelings.

I am trying to teach my kids to trust their instincts and stand up for themselves.  If they are uncomfortable with a situation, I want them to be able to step back and say no.  This is especially true when protecting their body is at stake.  I think it is very confusing to tell them they can say no to people touching them, but sometimes they have to just let themselves be hugged against their wills.  When you are a small child, this is very hard to understand!  And no, I don’t at all think they have the emotional capacity to think of the other person’s point of view.  Yes,  I will try to explain that great aunt whoever is safe and just wants to share the love she has for him in the form of a hug.  But it is going to take them time to reach that understanding.  I also try to think about what it is like when you are that little.  Someone way bigger and stronger than you wants to hug you, which basically is holding you against your will.  You can’t fight back, you are too small.  That is scary!  I don’t want my child feeling afraid of physical affection, and forcing it upon someone is no way to promote healthy touch between people.

I also don’t try to guilt my child into hugging someone.  I don’t mind trying a couple of times to suggest he give hugs.  But I do not think it is fair to tell a two-year-old that they are hurting a grown adult’s feelings by not hugging.  The adult should be, well, the adult in the situation and accept that the child does not want to hug.  Sure, it stings a little.  No one like to be rejected.  But I feel that using this technique to get a hug is teaching the child that they should feel ashamed or guilty when they try to protect themselves.  That is not right.  They have to right to decide who touches them and how in these situations.

Don’t get me wrong, I insist my child acknowledge others.  As I wrote about here, it is good manners and important to speak with others.  High fives, fist bumps, hellos.  These are all fine to push a little.  As adults sometimes we have to shake hands with and greet people we don’t really want to.  But rarely do we have to hug someone we truly don’t want to.  And when we do (probably a similar situation as I led with, a distant relative with a penchant for big hugs) we have the emotional capacity to understand why we are doing this and why we can still say no to others touching us. 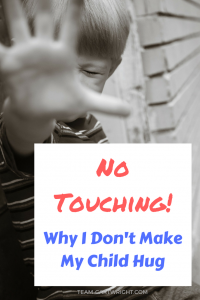 So no, my child might not hug you.  I will ask him if he is sure he doesn’t want to, but at the end of the day, it is his body and his decision.  I want him to know that his mother backs him up.  He is learning what his boundaries are for his personal space, and I support him in those decisions.  This might not be the popular position, and it might not be how other families feel.  But for me, it feels right.
–Kim

“Mommy, you need to smile.” Empathy Developments
Real vs Fake Fears: How to distinguish between the two
How to help your frustrated preschooler