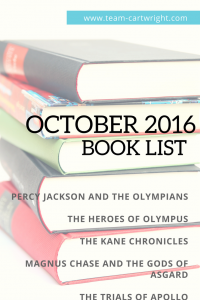 This month I read two books from the same author, Rick Riordan.  One was the second in a series and one was the start of a new spin off series.  I love these books and this author.  This month I am going to highlight these series.  I don’t want to recap too much and give a lot a way.  But trust me, these are great books for all ages.  Yes, they are technically young adult.  But I started reading them just before Ben was born and I have enjoyed them all.

These books all follow the same idea- the ancient gods exist and are still around today.  Of course ancient evil exists too and the gods alone can’t keep it at bay, they need the help of teen demigods.  (Why do such powerful entities need the help of teens?  Who knows.  It does seem silly, but hey, they are good stories.)

Percy Jackson & the Olympians is the first series.  It centers around Percy Jackson, a son of Poseidon and a place called Camp Half-Blood.  Camp Half-Blood is a safe place for children of the Greek gods to live and train.  A prophecy is given that sends Percy and some friends on a trek to save the world.  (There is a big theme of saving the world in all these series.  Apparently we are all in jeopardy a lot. 😛 )

The Heroes of Olympus carries on after Percy’s initial story.  In this series we learn that not only are the Greek gods around and active, their Roman counterparts are as well.  (And yes, the series talks about how that is possible.)  We meet demigods from Camp Jupiter, Camp Half-Blood’s Roman counterpart.  The new journey to save the world is even bigger than the last and has more great characters.

The Kane Chronicles is its own series, although it does allude to the Olympians briefly.  (And there are some crossover stories.)  These books are told a little differently, they are the transcripts from a brother and sister.   Their father is an Egyptologist who goes missing.  While trying to find him Carter and Sadie learn that they are descendants from a long line of powerful magicians.  They have to learn to use their magic to help save the world.

Magnus Chase and the Gods of Asgard is one of the newest series out right now, it is on book two.  This series centers around the ancient Norse gods.  Magnus is actually the cousin of one of the main characters from the Percy Jackson stories.  I really liked these as I did not know much about Norse mythology, besides of course what I’ve seen from the Thor movies.  (I’m thinking that isn’t enough to say I knew much about it.)  Yes, they have to work to save the world again.  (Okay, I am simplifying it a bit.  The world isn’t always in total peril in these books, but more or less things will go very very badly for the planet if the main characters don’t step in and save the day.)  Spoiler alert- there are hints at the end of the second book that some of the Greek demigods are going to play a bigger part in future books!

The final book I read this month was The Trials of Apollo.  Apollo falls to earth as a human and has to find a way to redeem himself to regain his godly status.  We end up back at Camp Half-Blood.  New forces are gathering to try to cause trouble for the demigods and the world in general.  Only one book in this series is out already.  Characters from the Olympians make a comeback at the end, which I think is very exciting.

So why do I like these books so much?  The biggest thing is that they are fun.  They are exciting and full of action.  You can read them on their own, but if you read all the series you get to learn more and more about how they all fit together.  (It can get a bit confusing how all these ancient deities are still operating at the same time.) I really can’t wait for Ben, Ali, and Sammy to be big enough to read these as a family.  I think these books are fun for adults, but really great for kids.  They are chock full of mythology.  This might not seem like an area kids need to know a lot about, but it does actually play in to a lot of arenas.  First of all, it is history.  Yes, it might be viewed as just a bunch of stories.  But they are the stories of cultures.  They tell what different groups of people in history have valued, how they related to each other, and how they viewed the world around them.  The gods in these books are imperfect, and this gives a good opening to discussions about character and how to handle strengths and weaknesses.  Mythology plays into a lot of literary illusions and great works, so a working knowledge of it can be very helpful.  Beyond the mythology the books have a ton of lessons on team work, sacrifice, and finding your way in life.  Important lessons that I am looking forward to sharing with my kids.  I view these books as ‘keepers.’  I love to own books, but try to limit myself so as not to overrun our home with books.  These books are ones that I want to invest in to reread again, with the kids and on my own.  I really recommend them to everyone.  (And yes, these links are affiliate links.  All these opinions are completely my own.  I really do love these books this much.)