A couple of weeks ago Ben and I were out for a walk.  We sometime go to the school across the street to play on the playground there.  This particular day, we got lucky and found a couple of balls left out.  I decided it was a good time to teach Ben how to play basketball.  I actually played basketball for several years when I was younger, even making the high school team for a bit.  Granted all that really means is I do actually understand the basic rules and skills needed to play the game.  It by no means implies that I am good at it, or still have those skills.  I like I think I can teach Ben a thing or to about it though.
Since he is new to the game, and the ball almost comes up to his waist, I decided to go right to shooting.  I know ball handling is important, and defense wins games.  But scoring is fun.  The first hoop we tried might have been a bit too high for Ben though… 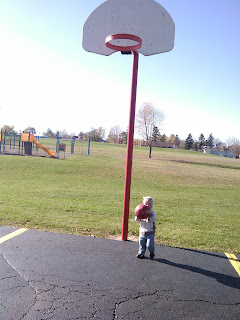 Ben gave the ball a good heave to get it up there, but it didn’t quite make it.  I thought about holding him up to dunk, but then realized I’m not that tall either.  Fortunately the school has a couple of smaller hoops as well as the full size ones.

I think Ben still needs a couple of inches to really get into the game.  He had a lot of fun throwing the ball and chasing it around.  I have to say I love this age Ben is at.  He clapped for me any time I made a basket.  He really knows how to make his mom feel good about her athletic abilities (especially with the belly right now!). 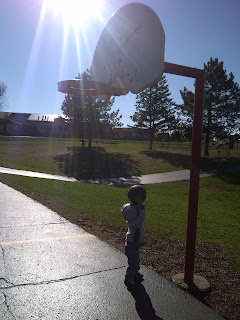 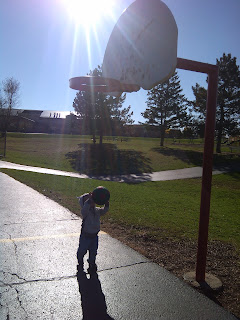 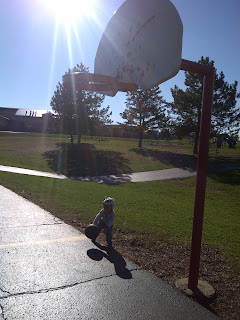 Ben had fun chasing the ball around.  I had fun pretending to be an awesome basketball star.  (I mean, how fun is it to have a short hoop?  I feel like a rock star when I play)  I hope Ben gets enjoyment out of sports when he is older.  He doesn’t have to be the best or super competitive, but the joy of the game is something I know Pat and I hope to pass on.  Of course if he doesn’t that is fine too.  Until then I am going to enjoy letting him think I have skills well beyond what I actually do.  😉