The story of the move: Settling in

Once we made the decision to move and took our epic road trip, we were ready to get settled again.  Pat and I are so grateful to my Aunt Gail and Uncle Dan for letting us stay at their place.  It was so nice to have a place to stay while we looked for a home.  First of all, it saved us money from having to stay in a hotel.  It let Pat get down here quickly to start his job and have a comfortable place to stay.  Plus it saved us from having to just pick a place fast or sight unseen just to have somewhere to be.  It gave me the chance to look around and find a place that met our needs and was at the right price.  Yes, Pat was here early, but really we all know I wanted to be the one with a major say in our new home.  As an added bonus they have a really nice house (with a pool!) so the kids and I got a mini vacation feel at the end of our long trip!  Ben loved swimming and playing at the house.  The girls had fun too!  We did take them swimming, their first time!  They both enjoyed it for the most part.  Ali giggled and smiled the whole time.  She was really into it.  Sammy was a little more subtle about it, as per usual.  She clung to us pretty tightly, but she had her tiny smile on.  With two babies, a toddler, and only two parents the girls didn’t swim much. Pat and I took turns with Ben in the pool.  We loved all the pool time we got to have! 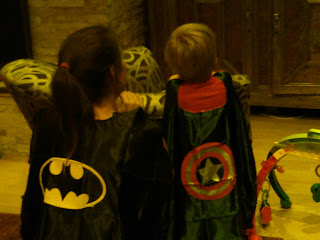 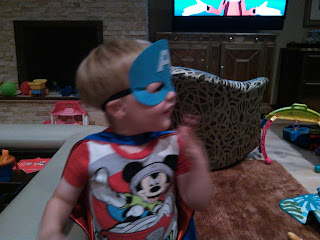 Omi and Meo stayed around after the first weekend.  Omi had to head back for work, but Meo stayed the whole next week.  This was huge.  I spent several days driving all over the place looking at potential homes.  Having someone to watch the kids made this so much easier.  I took a look at several and found one I really liked.  We are renting for a year to get a feel for the area and see where we actually want to settle.  Fortunately for us we got the one I liked best!!  Yay!  It worked out perfectly that I found out we got the house we wanted just before we took Meo to the airport to fly home.  It was wonderful to know we had a place to call our own!

Of course finding the place didn’t mean we were done.  We had to do that pesky actually move in, unpack, and get our new lives set up stuff.  (Part of that was getting internet set up, which took some time.  This all contributed to the lack of blogging for a bit.)  The house we found is actually about 45 minutes to an hour away from my aunt and uncle.  We spent a good deal of time in the car driving back and forth as we got everything set up.  We signed the lease midweek, but couldn’t get movers right away.  The kids and I drove back and forth to set up what we could and take care of all that pesky stuff that goes with moving across state lines.  I have to brag here, the kids were so good with all of this!  We had to get to the DMV, the post office, wait for the gas man, make phone calls, and drive all over.  Ali and Sammy had to take some car naps, which isn’t my favorite thing to do.  But it is hard to get things done an hour away in the short time between naps!  Ben had to spend a lot of time in the car and waiting in lines.  All three of them were amazing.  (I think I’m going to have to do a post just on how much babywise played a part in this.)  Moving isn’t easy as an adult, and the kids rolled with everything so well.

I tried to have some fun with the kids in all the craziness.  Ben loves the new house.  He really enjoyed running around when nothing was moved in yet!  The girls have gotten so busy too!  They aren’t officially crawling yet, thank goodness.  But they wiggle and roll and manage to get all over the place!  It doesn’t seem to be directed motion yet.  Ben didn’t crawl until he was almost a year old and it was wonderful.  It is so much easier to keep the kids safe when they stay where you put them!  Plus once Ben did start crawling he was older and better able to understand limits and the word no.  I admit I’m a little concerned with how much the girls are able to wiggle around this young.  Two of them getting around on their own?!  I’m not ready!  It is fun to watch them play at least. 🙂

Moving day had to take place on a week day, so it was just me and the kids.  I love having a three bedroom.  I was able to have the kids all in one room to stay safe while the movers worked.  They had fun too!

Our new home is a ranch.  I wasn’t sure what I would think of that, being used to stairs and all.  But with the little ones let me tell you it is awesome.  I can have all three kids playing in their rooms and still see them and hear them well.  I can get to them in no time if needed.  It really made unpacking easier.

Over the weekend Pat was able to help us out.  Ben was super pumped to help Pat out.  Yeah, you can imagine how much ‘help’ the three year old offered up, but it was adorable to watch the two of them together.  Pat was so great and patient, explaining everything he was doing and finding ways for Ben to participate.  I think it really helped Ben feel comfortable in his new home.  He had a sense of ownership from helping out.

Another big thing with the move was finally getting the kids into their ‘new’ beds!  Ben was still in his crib.  Yes, he did just turn three and was still in a crib.  He loved it and never tried to climb out.  When it comes to sleep I tend to stick to a ‘if it ain’t broke…’ mentality.  Ben slept really well in his crib and was happy.  Moving gave us the perfect chance to turn his bed into a toddler bed.  It added to the excitement of the move.  He loves it!  And he has been doing really well with staying in it!  We talked up the big boy bed for a long time, really emphasizing that you do not get out of bed.  So far so good.  We’ll see how he does long term.  The girls had their cribs set up in our old house, but they hadn’t really slept in them much.  They had napped in them, they just hadn’t done overnight there yet.  At our old place all three kids shared one room and I was worried they would all wake each other up.  As I have said a lot, I love sleep and don’t like to mess with what is working.  So we just kept the girls in our room.  Same as with Ben, I didn’t see the point of making big changes right before the Major Change of moving, so the girls ended up staying in our room and sleeping together for a lot longer than planned.  Some of my worries were for nothing.  Ben, Ali, and Sammy all slept in the same room at my aunt and uncle’s place and they did well!  This move came at a great time though, because Ali and Sammy were starting to wake each other up with all their wiggling around.    I was worried about switching them to cribs so late, but they seem to like the cribs!  They are sleeping nicely in their beds and don’t seem to mind being on their own.

(Before I get angry comments, yes, we use bumpers at this age.  I have read all about crib safety and know that nothing should be in the bed with young babies.  They had nothing in their beds until this point.  Ali and Sammy can both lift their heads well, roll around, and I do not think they are unsafe for them at this point.  After being put in the cribs for the first time both managed to wiggle and get their legs caught between the slats.  The bumpers prevent them from injuring themselves this way.  I have done my research, and I have made my decision to do what I think is in their best interest.)

So that is the story of our move!  We packed, took a three day drive, found a new house, and got all moved in.  It’s been busy, but we are so happy with our decision to do this.  I love our new house.  The kids seem really happy.  And Pat is enjoying his new job.  Now we have to focus on finding new activities and friends here!

Thank you again to everyone who helped us through this major life change.  We did not do this alone.  We are so grateful to all our amazing friends and family.

Catch up on how our moving story started!  Deciding to move and packing and the road trip!