Once again, Dagger and Ben have shown me that toddlers and cats are practically the same.  Okay, maybe not the same, but more similar than you might think.

This past weekend I was doing laundry, as usual.  I had left the laundry basket down in the basement on the machine, but I was upstairs to get a new load.  Not wanting to walk up and down the stairs more than necessary (is it too early to blame the babies for that?), I simply grabbed the hamper and brought the whole thing downstairs.  Ben found the hamper (once the clothes were out of it), and started playing with it.  He put toys in, took them out.  It’s the type of hamper that can compress down in size to save space, so he enjoyed pressing it down and watching it bounce back up.  (Incidentally, it is the hamper Meo and Omi got me when I went to college.  Look guys- something you invested wisely in!  I still have it!;) )

After playing around the hamper a little bit, Ben pulled it over to me and tapped it while lifting up his arms.  Yes, he wanted to be in the hamper.  Well, being the good mom that I am, I of course put my child right in there.  And he loved it.  He wanted to get in and out.  He brought toys in with him.  He sat and giggled at us.  It was the best toy ever for a bit. 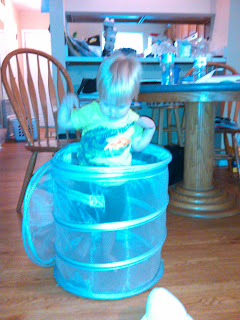 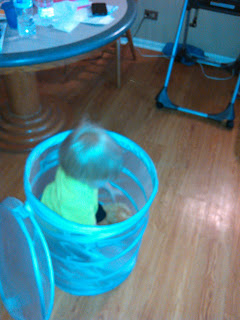 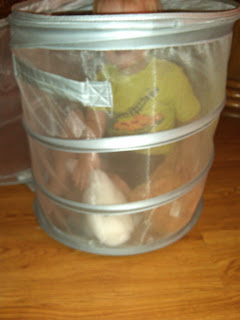 I’m sorry they aren’t the best pictures.  But Ben and I were both giggling, and he just doesn’t hold still much anymore.

Well, Ben had his fun and we went about our evening.  After we put Ben to bed, the hamper was still sitting in the living room.  Dagger always comes down at night to hang out with us.  I saw her come down, but then didn’t see her for a little bit.  Well it was easy to find her.  Yep, in the hamper, as happy as can be. 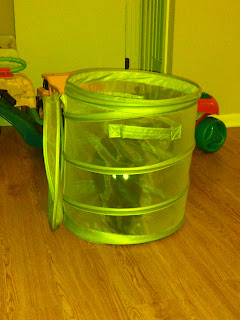 Dagger hung out in the basket for almost an hour.

I know some people think getting a pet isn’t real practice for having a kid.  It’s true, they aren’t the same thing.  But perhaps having a cat isn’t always that different from having a toddler…