Transitions: Helping my child move across the country

Moving is a big deal, regardless of how old you are.  But when are two (almost three) and moving not only out of the only home you’ve ever known, but to an entirely different part of the country it is an even bigger deal.  While I know we are making a great decision for our family in this major move, I was worried about how it would affect the kids.  Now I am for sure no expert on this.  But we did just go through it and so far the kids are doing well!  Okay, the girls don’t really care, seeing as they are only seven months old.  We did completely change Ben’s world though, so here is how I tried to help him through the transition. 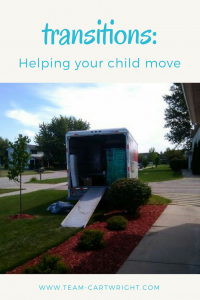 1) Really talk up the new place.  I found any reason I could to explain why our new town was going to be amazing.  I told Ben all about how it would be warmer.  We would be closer to two of his cousins.  I told him our new town would have parks.  He would get to have his own room.  We would have a new house with a little more room for his toys.  And the best thing of all- Daddy was already there!  That made everything about our new place exciting.  I watched my tone when I talked about the move.  Moving is a big old pain a lot of the time, but I tried to use happy and excited tones whenever we talked about it.  I didn’t want Ben to catch on to my frustrated moments and equate them with where we were going.  This was a great adventure!

2) Show real images of the new location.  We made sure to Skype with Pat every night so Ben could see where we would be going.  I think this helped make it a more concrete location in Ben’s mind, and not just some unknown we were heading toward.  Of course it isn’t always possible to have someone else go ahead and be waiting at the new destination.  But I think showing pictures of real places where you will be going would work as well.  We also pulled out pictures of the family he would be seeing more often and talked about them frequently.  My goal with this was to have Ben feel like he knew this family, even though in the past we would only see them every couple of years.

3) Make a plan for a fun event in the new place as soon as possible.  For us we were pretty lucky- Ben’s birthday was two weeks after we moved.  We talked about how his birthday party would be in our new home.  We planned his birthday party there.  (Again we are lucky.  Since he is turning just three years old he was pretty happy with swimming, cake, and presents for his party)  I don’t think it has to be as big as a birthday party.  Plan a trip to a favorite restaurant, or maybe another fun activity like mini golf.  Maybe a big family movie night once everything is unpacked.  Anything that your child can look forward to.  This also gives you something fun to think about in the middle of all the planning.

4) Involve the child in the packing process.  This can be hard if the kid is young, like Ben.  But I had him help me put his toys in boxes.  Yes, I sometimes had to go back during naps and repack a little more efficiently.  But he knew his items were being packed up because he did it.  I also let him play in the boxes.  What kid doesn’t love a box?  We made tunnels and forts, and tried to make the whole thing as fun as possible.  I also talked ad nauseam about what I was doing as I packed.  What I was packing, why I was packing it, and when we would open it again.

5) Maintain what consistency you can.  All through the packing process we still kept naps and independent play time going.  We still went to playgroup.  We finished Ben’s swim lessons.  Yes, it meant packing took a little longer.  But Ben got to keep his structure, which little ones really need.  I also made sure to pack his sleep friends with us in the car to have on the road.  Yes, it meant bringing a few extra things in the car.  I think it was worth it for Ben to feel comforted and sleep well on the road and when we got to our new place.  I tried to pack his favorite shirts and socks in his suitcase to have right away.  I brought some favorite dvds to watch in the car.  I feel better when I have my favorite things with me, so I assume he does too.

6) Talk about how it is okay to be sad.  I encouraged Ben to tell me when he was feeling sad about the move.  He would often tell me he was sad because he missed Daddy.  Whenever he did this I would stop what I was doing and sit down to talk with him.  I told him it was okay to feel sad, but explained why we were going through the changes we were.  I think allowing Ben to express his feelings and reaffirming that it is okay to feel sad and less than happy about the changes helped him out.

7) Show examples of changes that the child can relate to.  We got lucky here.  Ben adores Toy Story, and in the first movie Andy moves!  Ben really related to this, and his Buzz and Woody were car friends on his move just like with Andy.  We also watched Inside Out a lot during the packing process.  I’m not sure how much Ben related to Riley’s move, as she is older than he is.  But he recognizes the feelings characters, and it helped him put words and understanding to what he was going through emotionally. I know not everyone is in to screen time, but it worked for Ben.  The library has a ton of books on moving and making these kinds of changes.

8)  Make a point of saying goodbye.  On our last day and night at our old house Ben and I talked about how we were leaving soon.  We took the time to say thank you to our old house for letting us live in it.  We said we had enjoyed living there, but it was time to move on.  When Ben asks about the old house now, I remind him that we thanked the old home and said goodbye.  He still misses it, but I do think it helped give a sense of closure.

These are the eight big ways I tried to help Ben adjust to moving across the country.  Of course these aren’t the only ways.  And we haven’t been here very long, so I know we are still in the process of transitioning.  Ben will miss our old home, that is only normal.  I think talking about it is the best thing I can do to help him out.  I want him to know it is okay to feel sad.  I also like to remind him of all the good that is coming from our big change.  Most important, I remind him of how loved he is.  I remind him that he is safe with his family.  Kids are resilient and able to handle a lot!

It’s a Babywise Friendly Blog Network pinterest day!  Everyone is talking about transitions.  Be sure to check them all out!