“Well put one back!” Our twin story.

Sadly, these are some of the first words I spoke when I found out we were having twins.  If my daughters ever read this- I’m sorry.  You were loved and wanted, but you were not expected.  Let me back up and start a little sooner than that doctor’s appointment. 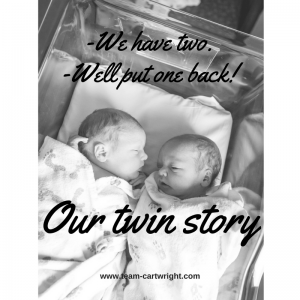 In the spring of 2015, Pat and I got to thinking it was time to think about having a second child.  We adored Ben and knew that we wanted him to have a sibling.   Ben was an easy baby and a delightful young toddler, so we were eager to have another baby.  We had decided to wait a little longer to make sure we were in a good spot financially to have a second baby.  Eventually though, we got tired of waiting.  When is it ever the perfect time to have a baby?  We weren’t getting any younger, and we did want our kids relatively close in age.  Totally TMI, but we decided to just go with don’t try/don’t prevent and see what happened.

Since we weren’t trying per se, I wasn’t really expecting to be on the lookout for pregnancy signs.  Plus with work, tutoring, and running around after a toddler I wasn’t thinking too hard about it  Because of all this, I really didn’t think I was pregnant.  Then I had the moment when I thought hmmm….

Well sure enough, we were expecting.  We were very excited.  I wanted to tell our parents pretty early.  When were expecting Ben we were actually still living with my parents, and were traveling to see Pat’s parents for the holidays.  We didn’t know if morning sickness or any other symptoms would hit, so we decided to tell my parents pretty early.  Our first doctor’s appointment was scheduled for a week after we got back from visiting Pat’s family.  We couldn’t imagine calling them a week after we had seen them in person to tell them big news we kept from them the whole time.  That just seemed rude.  We ended up telling our parents and siblings at just five weeks.  It made Pat more nervous than me, but as I said it made sense to do it that way.  This time around Pat thought we should wait, and I am very glad we followed his hunch.

I scheduled my first doctor’s appointment, excited that Pat could be there for it.  I didn’t know what to expect with the first pregnancy and thought they would just do a blood test, take a history, and send me on my way.  I didn’t know they could hear the heartbeat and see the flicker that early.  Pat was sick for the first appointment with Ben and I told him to stay home.  We were both a little disappointed he missed the excitement of seeing the flicker of the heartbeat.  This time I made sure he could be at the appointment.  We decided to bring Ben with us too.  Ben wasn’t talking much then.  I wasn’t worried he would spill the beans.  I thought it would help him understand a new baby was coming if he was there every step of the way.

We were pretty relaxed about the appointment.  I mean, we had done this once before.  I didn’t have any problems with the last pregnancy.  In fact, I am one of those annoying women who feel pretty good during pregnancy.  I adore it and we were so happy to be having another kid.  Ben had been a delight as a baby, and we were still completely enamored with him.  Having another kid was going to be amazing.  We even joked with the nurses that we wanted another baby just like Ben, just a newer model year.  Pat had said, “We don’t care the gender, as long as there is just one in there.”  You see when your sister-in-law has twins, you make jokes like this.  Pat also has twin cousins.  We had seen people have twins and knew it could be tough.  But really, we weren’t going to have twins ourselves.  I mean, the twins in Pat’s family were all fraternal.  This means in order for it to be hereditary it would have to pass along the maternal line.  Obviously, I don’t share a genetic line with Pat’s sisters or cousins.  I couldn’t think of any twins in my family to give us reason to think we were having them.  And come on, Pat’s sister had twins!  What are the odds another set would come into the same family?

Alright, we were all relaxed, having fun and congratulating Ben on becoming a big brother.  The doctor came in and I laid back on the table to do the initial ultrasound.  The image had just popped up on the screen when the doctor said,  “We have two in there.”  My mouth dropped open and I replied, “Well put one back!”  My doctor looked surprised, “It, it doesn’t work that way…”

The mood in the room had quickly shifted to one of disbelief.  Honestly it kind of blurs for a bit here.  Pat and I asked the doctor to explain again what she just said.  My doctor pointed out the two different flickers, and then let us hear two different heartbeats.  I couldn’t stop staring at that screen.  There were definitely two little blobs in there.  They were very close to each other, but they were there.  Twins.

Looking back there were a few signs that maybe we should have expected something different.  I did test positive early, which makes sense because twins means more hCG.  My stomach also started sticking out what felt like right away.  I know at the beginning that is mainly bloat.  But still, I remember distinctly thinking that they weren’t kidding when they say you start showing sooner with the second kid.  I feel a little better knowing I had two babies in there.  😉  Of course, hindsight is always 20/20, so I didn’t even consider that we were having twins.  But we were.

We had a bunch of questions to start out with.  My first, after of course asking if the doctor was sure, was what kind they were.  I try to remember this when people ask me questions about what kind of twins I have now.  I mean, I knew the main differences between fraternal and identical but I didn’t know you can’t always tell right away.  There is a lot you learn when you are the ones actually having twins.  My doctor told us probably fraternal actually, as those are the most common.  There are some factors that can up your chances of having fraternal twins.  I was over thirty, but not yet old enough for that to really be an issue.  And as I said we didn’t have fraternal twins in my maternal line.  Later we would find out that they are identical.  This means we were part of the lucky 3 out of 1000 to have their little zygote split into two babies.

We left that appointment shocked to say the least.  I was in such a daze by it all I forgot to stop and get my blood work done before I left.  My doctor told us at that early stage you really just treat it as a singleton pregnancy.  That was good, I knew what to do with that, and it would give me time to process what was happening.  The whole thing didn’t feel real.  It was like someone was going to jump out and say, “Just kidding!”  My doctor did come up to me as I was making my next appointment, and I almost wondered if she was going to tell me she made a mistake.  Nope, it was to let the receptionist know I needed the twin sheet to start setting appointments.  It just became that much more real.

I had to leave to go back to the office after this appointment.  The office where I worked with Meo and Omi.  All I could think was don’t google yet, don’t google yet, don’t say a word yet.  There was plenty of time to google later.  And I wasn’t ready to share the news with anyone yet.  I thought I was keeping it nonchalant, but apparently, I wasn’t.  Meo and Omi were pretty certain Pat and I had a huge fight or something.  This was not the case, and they found out the reason for my strange behavior soon enough.

Having a baby is amazing.  When you really sit and think about all that goes into creating a whole new life, you can’t help but be in awe of it.  We have the extra special gift of getting to see two new lives created.  Somewhere between days four and seven, my little one decided she had too much awesome to be one person, and split into two to become my Ali and Sammy.  I can’t imagine life without my two sweet girls.  We are so blessed to be their parents.

Jump ahead to the birth!  Here is Ali and Sammy’s birth story 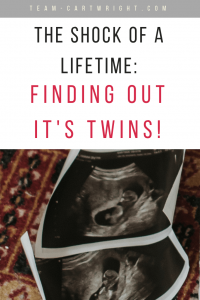 Get more help with your twins!

Twin Pregnancy: Why Do You Need So Many Appointments?

Shoot, you forgot Valentine's Day! A 4 step guide to faking it through the day.
Read Next Post →
Click here to cancel reply.