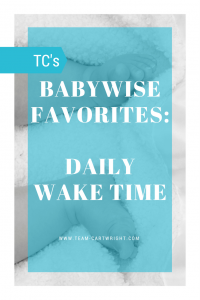 I thought I would start a series on a few of my favorite aspects of babywise.  I’m not claiming to be a babywise expert or anything.  I am for sure not a parenting expert.  But these tools have really helped me out as a parent.

One of the first things I used from babywise was the daily wake time.  Ben was a hungry baby.  He took a long time to consistently go three hours between nursing sessions.  As he was my only baby, it worked for us to  nurse on demand for a period.  However, it was frustrating to me to not know when he would want to eat.  Getting to work in the morning varied as sometimes Ben would want to eat at 8am, other times 7am, or 8:30am.  That would also change how quickly he wanted to eat once we got to the office.  I worked for Omi, so this wasn’t a huge deal, but it bothered me.  I found that if I fed him at the same time every morning regardless of his nighttime wake ups the rest of the day fell into a more consistent pattern.  This was awesome, and is what babywise tells us will hopefully happen.

Daily wake time was one of the first things I started with Ali and Sammy.  We had a lot of visitors the first few weeks, so I didn’t push for nap times too quickly.  It is important to feed on demand in the early weeks, and we did so, but I still needed some consistency to the day for Ben’s sake.  The daily wake time helped give us that.  The girls fell into a good pattern very fast, and that was awesome for our family.  Once I wanted to work on naps and longer wake times it was much easier, because I already had a starting point for our days.

How do you start using a daily wake time?  Well, this is one of my favorite tools because it is kind of simple.  Pick a time you want to do the first day time feeding of the day.  Of course there are several factors that can come into play with that.  Is there a time you need to be at work?  What are the wake times of the other children in the house?  Are you a morning person?  I have found that with newborns I liked starting at 8am.  This way I could theoretically sleep until then as well.  In those early weeks it is all about getting the sleep you can.  Ben’s current wake time is 7, but if everyone is quiet in the house it can go til 7:30.  This gave me a chance to still sleep in a bit, but get some one on one time with Ben before having to feed Ali and Sammy.  I really think having this morning time helped Ben transition to having siblings, and still helps him by making sure he gets his mommy time without his little sisters around.

I know that an 8am wake up time is kind of late for a lot of people, but that is part of why I choose it too.  I knew from Ben that wake times tend to inch earlier and earlier.  In time I want the girls up by about 7, 7:30am, but no earlier.  Starting with an 8am wake time gives us a cushion to move around.  The reason for this is morning naps and wake times.  I wanted to have a set morning nap time and as babies get older they can handle a longer wake time.  With a late daily wake time I can push the wake time earlier to increase wake time instead of just moving nap time later.  Again, this lets the pattern for the day stay a little more consistent as wake times get longer.

Maintaining the wake time isn’t always easy in the early days.  The girls went through times of waking up early.  Anything before the wake time I treat as a middle of the night wake, meaning I fed them if needed, or I replace pacifiers or use other methods to soothe them back to sleep.  It also means that if the girls did happen to still be asleep at the wake time I had to wake them up.  Yes, this is hard sometimes!  I just wanted to sleep too!  But trust me it is one of those hards that is so worth it.  Ben sometimes wakes up before his wake time, but he hangs out happily in his bed until we come to get him.  If he does sleep in later at this point we let him, as he must need the sleep.  Once the morning nap is gone I have found that sleeping later doesn’t really impact the rest of the day.  The girls are already in a good place with their wake time of 7:30am.  They still wake up early sometimes, but they usually coo happily to themselves until we get them up.  Oh sure, sometimes I am up too early with the kids, but honestly that is the exception.  The kids’ wake times allow me to either sleep until they wake up, which is super nice to not have to get up until 7am, or I can get up and get ready for the day before they get up without having to be up with the sun.

It might sound selfish, but I really value my sleep.  I am a better mother if I am rested, and the kids are happier if they are rested.  The daily wake time is a huge help in making sure we all get the sleep we need.


Check out my other Babywise Favorites!
Independent Playtime
The Dream Feed
The Pause