How To Tell Identical Twins Apart

Wow, they look so much alike!  How do you tell them apart?

Alright, that is a bit of a tongue in cheek answer to a question I get asked all the time.  People always want to know how I can tell my identical twins apart.

I’m not wrong about the dancing thing.  They do each have their own unique moves.  But there are more ways than that.

While now I feel pretty confident in telling my daughters apart, one of my biggest worries during my twin pregnancy was that I wouldn’t be able to.  I think this is pretty normal.  Fortunately, there are several systems you can use to tell your identical twins apart.

Try these when you are asking yourself How can you tell identical twins apart? 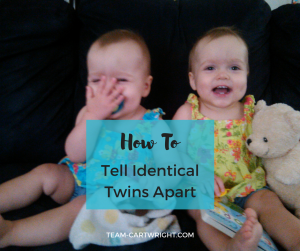 How To Tell Identical Twins Apart

Telling twins apart is a fear that comes up for pretty much every twin mom.  It doesn’t matter if you are having identical girl twins like me, I have heard this fear about fraternal twins too.  Babies look a lot alike, and in the sleep-deprived early crazy days you can confuse your boy twin for your girl twin.

The biggest thing to remember about telling identical twins apart is that you are their parents. You will learn every little difference between them. You just know your family.

To build your confidence, there are several things you can do.

Our hospital helped us out right from the start by putting the girls’ bands on opposite wrists.  This helped us know who was who at a glance.  Of course, there was also the obvious fact that the bands had Baby A and Baby B on them.  That helped too.

Once we left the hospital we kept Ali’s band on her until it was getting too small.  It was very reassuring to have this definitive method in those busy first few days.

Using polish on a nail is a great way to tell who is who.  I painted the big toe of each girl in different colors.  Babies like to suck on their hands, so I didn’t want to put anything on their fingers, just in case.

And I wanted to put colors on each girl in case it scratched off one.  This way we had two colors to rely on, not just one with color and one without.

The drawback to this method is in the middle of the night you might not be able to see your babies’ toes.  My girls were born in the winter, and I didn’t always want to take off their sleepers and pull out their feet to double check I had the right girl.

But it did make me feel better knowing we had an additional identification method in place.

An easy way to help in telling identical twin babies apart is color coding.   We didn’t necessarily assign one color to each girl.  (We had too many pink items to make that practical.)  But once one girl wore something, it was hers.  No switching allowed.

There were a few rules we followed.  Given the choice of pink and non-pink, Sammy got the pink.  Ali got everything with cats on it.  (Ali-Cat was an early nickname.) These are just a couple of examples.

I know some twin moms who assigned one twin a color and the other got everything else.  One could have solids and the other patterns.  There are lots of ways to do it.

Our rules have changed over time, but it also helps when we get new outfits to decide which one goes to which girl.  Clothing is a great way to tell who is who from across the room as well.  And write it down!

I would jot down the outfits every time I changed the girls.  I didn’t do anything fancy, but I was already writing down notes on eating and sleeping, so noting outfits wasn’t hard.  In a moment of panic, these notes were invaluable.

Things like freckles and moles are in different places.  Birthmarks are usually unique between identical twins.  Ali and Sammy each had small stork bites when they were born.  They were not in the same places, and that helped me feel confident I knew who my kids were.

A big thing to check is the belly button.  Everyone’s belly button is unique.  They are basically surgical scars, as every cut of the umbilical cord will be different.  Physical differences between twins may be subtle, but you have plenty of time to study them during the hours of feedings in those first few weeks. 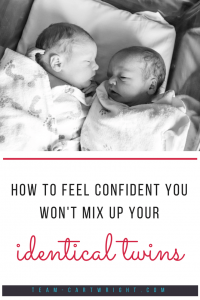 How To Tell Twins Apart in Pictures

Now that my girls are older I am confident I know who is who.  They each have their own spark and personality, making it easier for me at least to tell them apart.

Pictures are a different issue.  I think I can tell them apart in pictures but honestly, I have several where I am just guessing.  (Remember a lot of newborns look alike, not just twins.)  There are ways to combat that as well.

Whenever we took pictures of the girls I tried to put Ali on the left and Sammy on the right.  We gave each girl a lovey right away, (they didn’t sleep with them until they were older) and I would use the lovies to help identify who was who.

Whatever system you choose, make sure to go over your pictures and write down who is in the picture.  I think I will remember what outfits I assigned which baby, but already I know I am forgetting.  It is well worth taking the time to label any pictures so in a few years you aren’t wondering who is in your shots.

Despite the name, identical twins are rarely 100% identical.  Identicals have different fingerprints, belly buttons, and birthmarks.  As they age more and more differences can appear, even when it comes to height.

How we grow and develop depends on both nature (our DNA) and nurture (our experiences).  No two people share the same exact life experiences, not even identical twins.  As a result, they will not be exactly the same.  Identical twins might even have one left-handed twin and one right-handed!

As your twins grow and develop you will learn what makes each twin special.  (Like having their own dance moves.)

Give Yourself Grace as a Twin Parent

There will be times when you mix up your twins. You will call them by the wrong name.  This is so normal.

As a twin parent, I know I feel the pressure to make sure I recognize my daughters as individuals, not as a set.  So I feel guilty when I mix them up!  The truth is, they do look a lot alike.  So at a glance, I might not be able to definitively say who is who, especially from behind.

But you will be able to tell your twins apart.  Once I take that second to really look, I know exactly who I am talking to, regardless of anything else going on.  And that recognition sets in earlier than you might think.

I remember one late night breastfeeding session in particular.  Ali and Sammy were probably all of a month old.  I tried to take care to dress the girls in their assigned clothing.  I took notes on what they were wearing, and I had noted who was eating on which side that day.

But I looked at my girls, and I really felt like I had them switched.  Oh, I panicked of course.  I mean, I had mixed up my babies!  They would be psychologically scarred for life!

Fortunately, they had different belly buttons, and that confirmed that I had mixed up their pajamas.

While I was a  bit upset over my mistake, I was so reassured that I knew my babies.  Mixing up names or misremembering what event happened to who is normal.  It happens to every mom of more than one child, and parenting identical twins means it will probably happen even more.  (I’m curious to see when they are several years old if they try to switch places at school!) 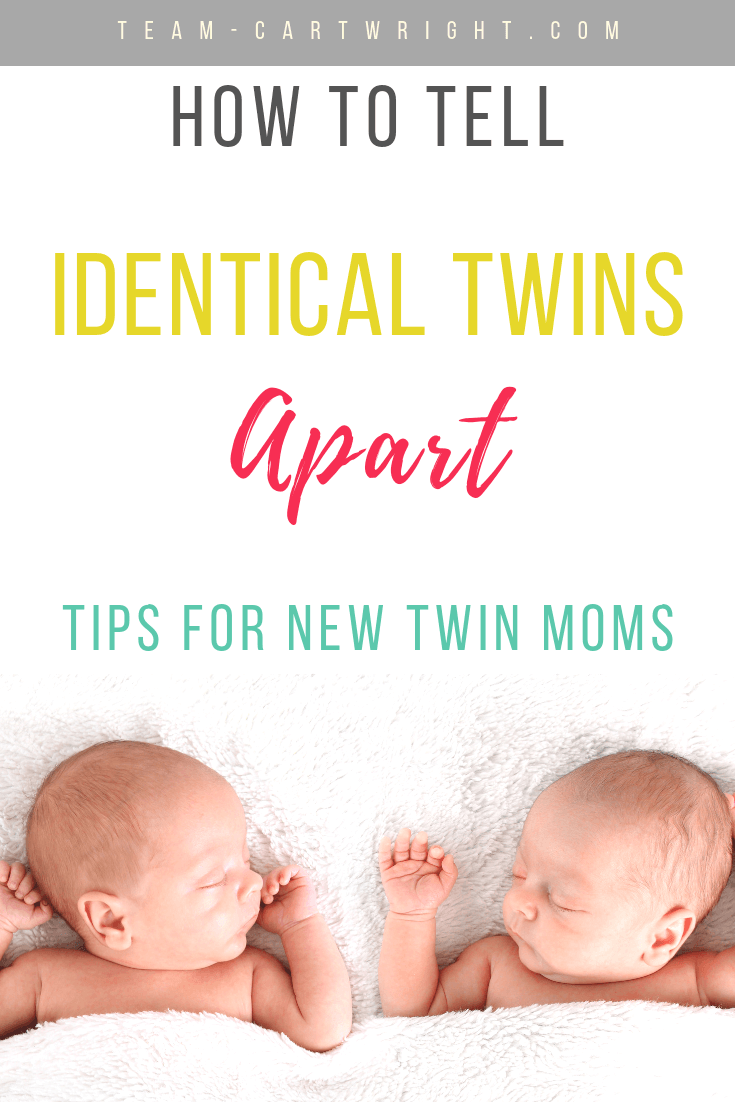 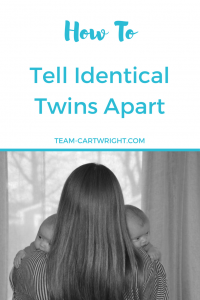 You will be able to tell your twins apart.  These systems can give you added reassurance that you know who is who.  I think that is important for peace of mind.  It is normal to call out the wrong name, and that doesn’t make you a bad mom.  You will know your babies.  You got this, Twin Mama.

Are you looking for more twin tips?  Check out these posts:

How to breastfeed twins: The logistics of double nursing

The Ultimate Guide To Breastfeeding Twins

Twin Z or My Brest Friend: Which Twin Nursing Pillow Is Best For You?

Why are identical twins different?

Identical Twins’ Genes Are Not Identical 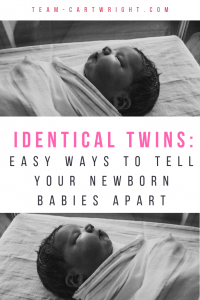 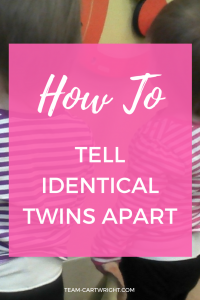